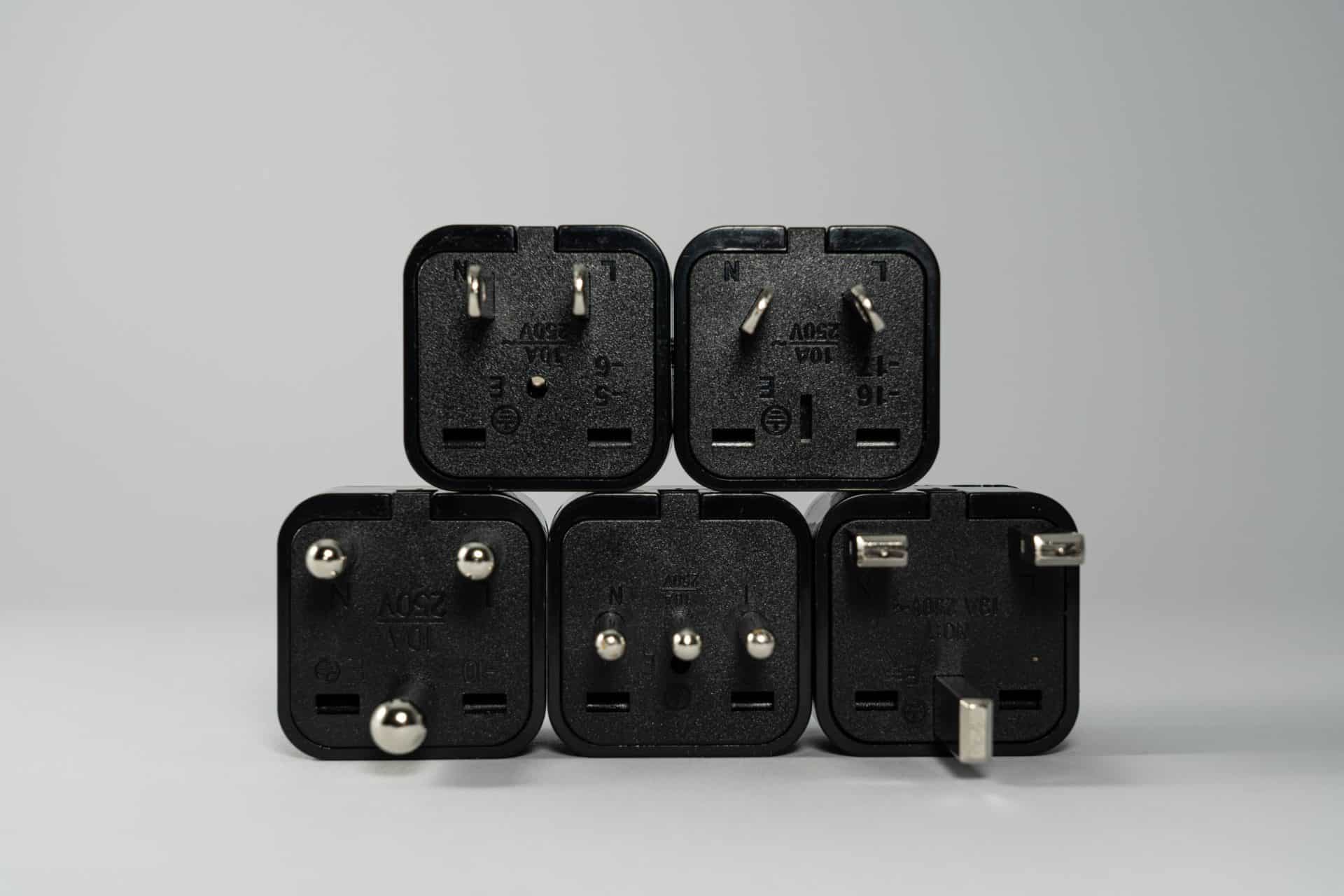 Standard in most of North, Central America and on the east coast of South America. Class II ungrounded with two flat parallel prongs.

Two-wire ungrounded plug with two round prongs, also known as the europlug and the most widely used international plug. It will mate with any socket that accepts 4.0 – 4.8 mm round contacts on 19 mm centres. Mostly used all over Europe except United Kingdom and Ireland.

Three large round pins in a triangular pattern – 5A, 250V

One of the most dangerous plug type in the world, as the prongs are not insulated so when you pull the plug half way out, its prongs are still connected to the socket. Mostly used in India, Sri Lanka, Nepal and Namibia and occasionally found in hotels in UK and Ireland.

Standard socket in France, Belgium and some other countries, except Germany and other continental European countries. The original type E plug, which does not have grounding clips, is no longer used, although very rarely it can still be found on some older appliances. A type C plug fits perfectly into a type E socket.

Commonly called as Schuko plug, a german word which means “earthed/grounded contact”. The plug was designed in Germany shortly after the First World War. It has grounding clips on both sides to mate with the type F socket and a female contact to accept the grounding pin of the type E socket.

British Standard BS 1363 requires use of a three-wire grounded and fused plug for all connections to the power mains (including class II, two-wire appliances). Considered one of the safest plugs in the world.

In 1989 Israel standardised on a new version of the type H socket: the holes were made round in order to accommodate type C plugs as well. One of the most dangerous plugs in the world as the prongs are not insulated.

Australia’s standard plug/socket system is described in SAA document AS 3112 and is used in applications up to 10 amps. A plug/socket configuration with rating at 15 amps (ground pin is wider: 8 mm instead of 6.35 mm) is also available. A lower-amperage plug will always fit into a higher-amperage outlet but not vice versa.

Switzerland has its own standard which is described in SEC 1011. This plug is similar to C, except that it has the addition of a grounding pin. Considered one of the most dangerous plugs in the world as the prongs are not insulated.

Danish standard and is similar to F except that it has a grounding pin instead of grounding clips. A type C plug fits perfectly into a type K socket. Because of the huge amount of E/F plugs in Denmark, the Danish government decided to make it legal to install type E instead of type K sockets from 2008 onwards.

Mostly used in Israel for heavy appliances such as air-conditioning circuits and washing machines. Because its prongs are not insulated, it is considered as one of the most dangerous plugs in the world.

Standard in Brazil and was gradually phased in between 2007 – 2010. Type N sockets were specifically designed to accommodate the ubiquitous type C plugs as well.