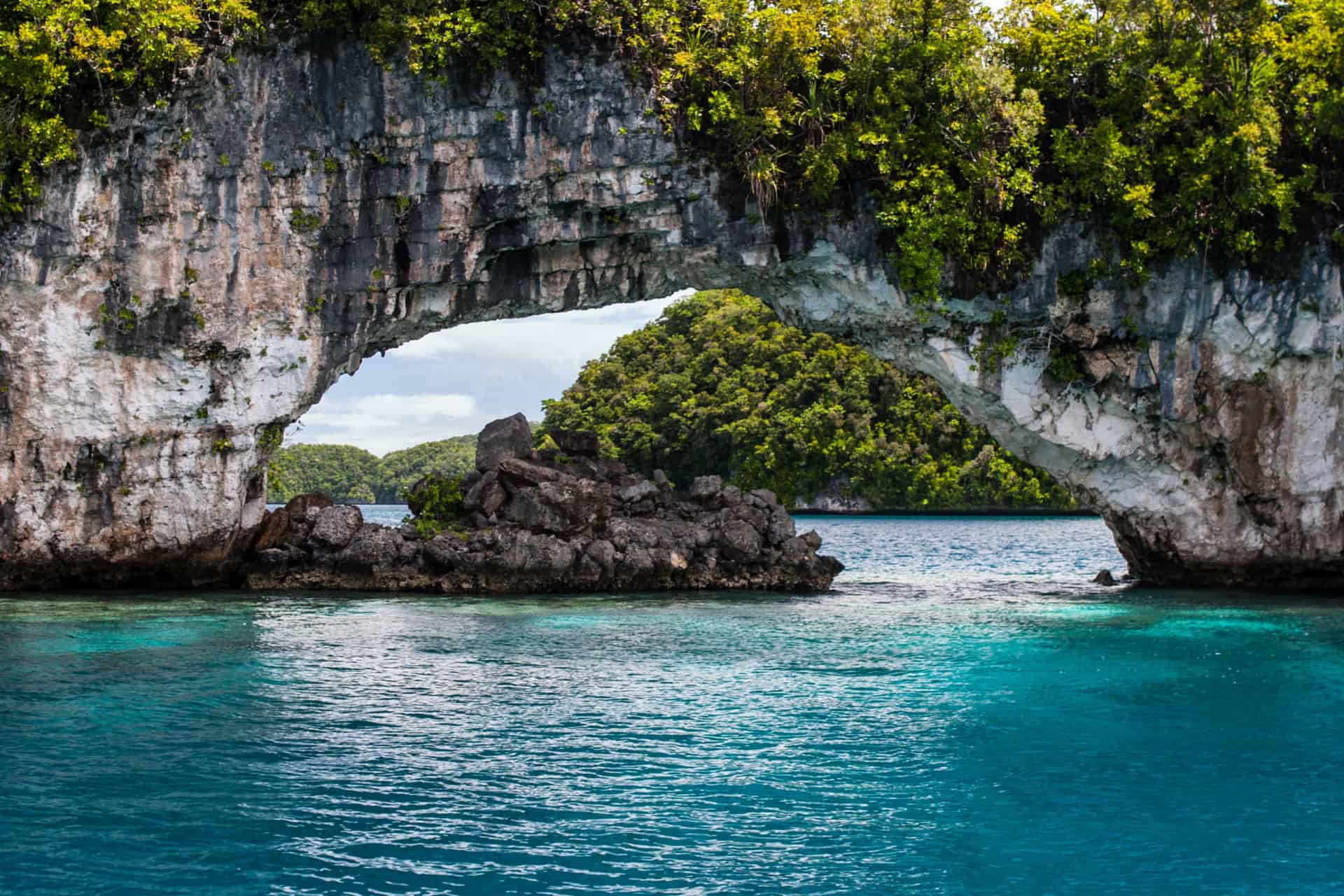 A stone city located in the eastern shore of the state of Pohnpei, Nan Madol is mainly composed of 90 man-made islets connected by canals and enclosed by stone walls. The city, also known as the Venice of the Pacific, was built as the residence of ancient royalties during the Saudeleur dynasty.

Some islets served as mortuaries, and others were used for special purposes such as coconut oil preparation, canoe building, and food preparation. It is said that the population of Nan Madol was less than a thousand.

The ruins of Nan Madol suggest that it had been inhabited as early as the first or second century AD. But it was during the eighth or ninth century that the islets were constructed. And by twelfth or thirteenth century, the construction of the megalith was begun.

What stuns archeologists is the construction of Nan Madol. The walls, which are about 17 to 25 feet tall and 17 feet thick, are made of basalt stones and arranged in an alternating pattern.

Archeological investigations proved that there were no basalt sources in Nan Madol, so how the Pohnpeians transported the heavy basalt stones to the site is a mystery.

Sokehs Rock, another landmark in Pohnpei, is mesmerizing to look at, especially from afar. This very steep cliff juts out from a lush mountainous terrain, figuring prominently amidst the greenery.

But what is even more mesmerizing is the view at the top of Sokehs Rock. The cliff treats you to a breathtaking display of the sea with patches of green, a picturesque complement to the soft-looking, light blue sky. Every bit serene, the view lulls the inner you.

Reaching the top, of course, is a heart-pumping adventure. You have to hike uphill to reach the base of Sokehs Rock, walking the trail and scaling steep rocks.

But the real challenge begins once you reach the base. There’s no other way here but up, so you have to start the ascent, holding on to the pipe that runs along the cliff, to tree roots, and practically to anything that will give you a good grip. Of course, a local guide will help you through.

Remember: Scaling Sokehs Rock is not for the faint-hearted, so do this only if you are fit for climbing.

Ant Atoll is one of the most visited outer destinations in Pohnpei. It is a small atoll 10 miles from the shore and can be reached by boat. What you will find here is clear water blessed with beautiful marine species. So whether you go diving, snorkeling, or deep fishing, you will have a memorable water adventure.

To the southwest of Pohnpei is Black Coral. With a diameter of 100 meters, this island is so tiny but superbly picturesque. The water is crystal clear and mirrors the blueness of the sky. Black Coral is teeming with tropical fish, making the island a superb diving spot.

Langer, Pakin, Kapingamarangi, and Nahlap are also beautiful outer islands that any adventure-seeking tourist must visit.

The Truk Lagoon Underwater Fleet is the most important and most popular attraction in the state of Chuuk. In fact, it is one of the most interesting wreck dive spots in the world.

Nowhere else in the world will you see a sprawling underwater museum of sunken warships, aircraft, and vessels in clear and shallow water. Truk Lagoon has more than 60 of these submerged attractions.

The wrecks remain as they were when they sunk – tanks, trucks, and jeeps strapped to the vessels; bottles in the hulls; and fighter planes in the holds. But these once mighty-looking war vessels are now covered with corals and sponges and serve as a lounging area of several marine species.

Sitting on and close to the wrecks are several other artifacts, such as chinaware, bicycles, bombs, and gas cylinders. And to complete the underwater museum, skulls are resting on the ocean floor.

Dublon is the Spanish name of the tropical island locally known as Tonoas. This island in the state of Chuuk was the headquarters of the Japanese Navy during World War II.

As a former headquarters, therefore, Dublon has several military ruins, which include fuel storage tanks, a seaplane anchorage, and a bunker.

But Dublon is not only an open museum of the Japanese occupation, because its natural beauty can breed an exciting nature adventure. Here you can go diving, snorkeling, and swimming.

If you want some cultural immersion, you can have a village tour and witness the simplicity of the locals’ daily living.

As you go about your activities, let your senses be captivated by the lush vegetation dotting the powdery shore and the calming sound of the blue water.

Weno, formerly known as Moen, is Chuuk’s capital. Compared to other Chuuk islands, Weno reflects a modern aura. The Chuuk International Airport stands here, and concrete roadways are spread across most of the villages.

With plenty of historical attractions, Weno is a traveler’s destination. You can start your journey by visiting Sapuk Lighthouse, a structure built during the Japanese occupation. All over the structure are hit marks, and below the lighthouse are guns used during World War II.

Visit the Nefo Cave as well. This is where some soldiers used to live to guard the north entryway. The cave is quite big, with a width of 10 feet, height of 6 feet, and length of 78 feet. A six-inch gun still lies inside the cave.

The historical sites only serve as a prelude to the attractions of Weno. Here in this island, the sight of waters, sand, and tall trees are inescapable, do make sure to savor the dazzling display of nature.

By the way, don’t forget to visit Mt. Tonachau, which, with a height of 229 meters, is the highest peak in Weno. The mountain offers a striking view of the island.

If you wish to satiate your World War II curiosity, pay Eten Island a visit. It is a small island in Chuuk, which was heavily leveled by the Japanese army and was turned into an airstrip.

The present shape of the island still resembles an aircraft, a seeming reminder of its past.

The war relics in Eten Island, which include the war-torn command post and old planes, will fill you in on wartime tales.

But aside from such remains, Eten Island also boasts of a certain serenity. Palm trees adorn the island, while the blue water is largely inviting.

So whether you want to take a rest from your water adventures or visit historical sites, Eten will be a relaxing getaway.

Yap is generally untouched by urbanity, so its centuries-old traditions and customs remain intact. In fact, its well-preserved island culture is Yap’s number one attraction.

Here in Yap, houses are made of wood and thatch, stone money is still widely used, traditional clothing is worn (woven hibiscus skirt for women and loincloth for men), weaving is an everyday activity, and traditional dance remains the most prominent art form.

Visits to villages, which include Wanyan, Waaloy, Balabat, and Okau, are culturally enriching and will leave you in awe at the simplicity and traditional living of the Yapese. With zeal, the locals will show you their huts, demonstrate coconut husking and other daily activities, allow you to sample their fresh fruits, and present to you their dance. Yapese, although shy at first, are generally friendly and accommodating.

Village tours can be arranged by your hotel. But when visiting a Yap village, make sure to wear proper attire. Women are expected to wear clothes that don’t show the thighs and are at least knee-length. Men, on the other hand, should wear long shorts.

Visiting the outer islands of Yap is an experience of a larger scale. In silent isolation, these islands are truly a lost paradise, boasting of a distinct island life and ancient traditions.

In the outer islands, you will witness the magnificent beauty of the unspoiled beaches and lagoons, mingle with the traditional chiefs, be one with the locals, and experience a life stripped of modernity.

If you’re considering an outer island tour, make sure to visit Ulithi. It is the fourth largest atoll in the world and offers pristine beach and spectacular dive sites.

When you’re in Ulithi, going from one island to another is easy. You can either take a boat or, if you happen to visit during the low-tide season, walk to the islands.

Fais is another lovely destination. An elevated coral island, Fais is ideal for snorkeling and underwater cave exploration. Fais has no electricity and water, so when here, expect to experience authentic island life.

West Fayu, Sorol, and Woleai also make a wonderful island vacation. Flights from Yap to all these outer islands are available but should be arranged at least six weeks before your visit.

Kosrae is a jewel island state of Micronesia. A profile of this state resembles a lady lying on her back, giving Kosrae the name the “Sleeping Lady.” Blessed with pristine water, abundant reef, and verdant terrains, Kosrae is a must-see destination.

You can spend your vacation in Kosrae in a variety of ways. If you are into hiking, you can traverse the trails in Mt. Finkol, which is the highest peak in the state, and Mt. Oma, which leads to gorgeous waterfalls and World War II caves.

A visit to archeological sites is ideal if you are interested in ancient history. Here in Kosrae, you will find Lelu Ruins, which, like Nan Madol Ruins, is proof of early human activities. The ruins are part of basaltic walls enclosing an ancient complex.

Menke Ruins, although smaller than Lelu, is also an interesting site. It is believed to be where the ancient people worshipped the goddess Singlaku. The site also has hiking trails that feature medically useful plants.

Punctuate your vacation by diving into the waters teeming with vibrant and brilliantly colored marine species. Dolphins, whales, tropical fish species, and corals all make a beautiful underwater world. 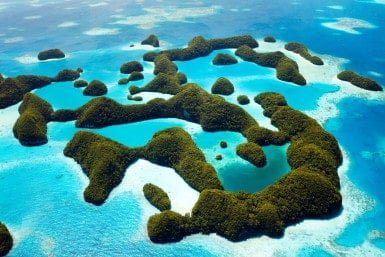 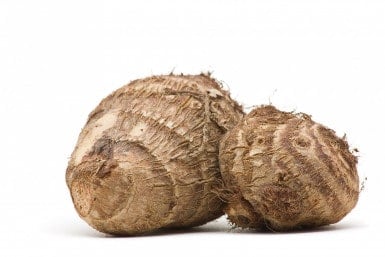