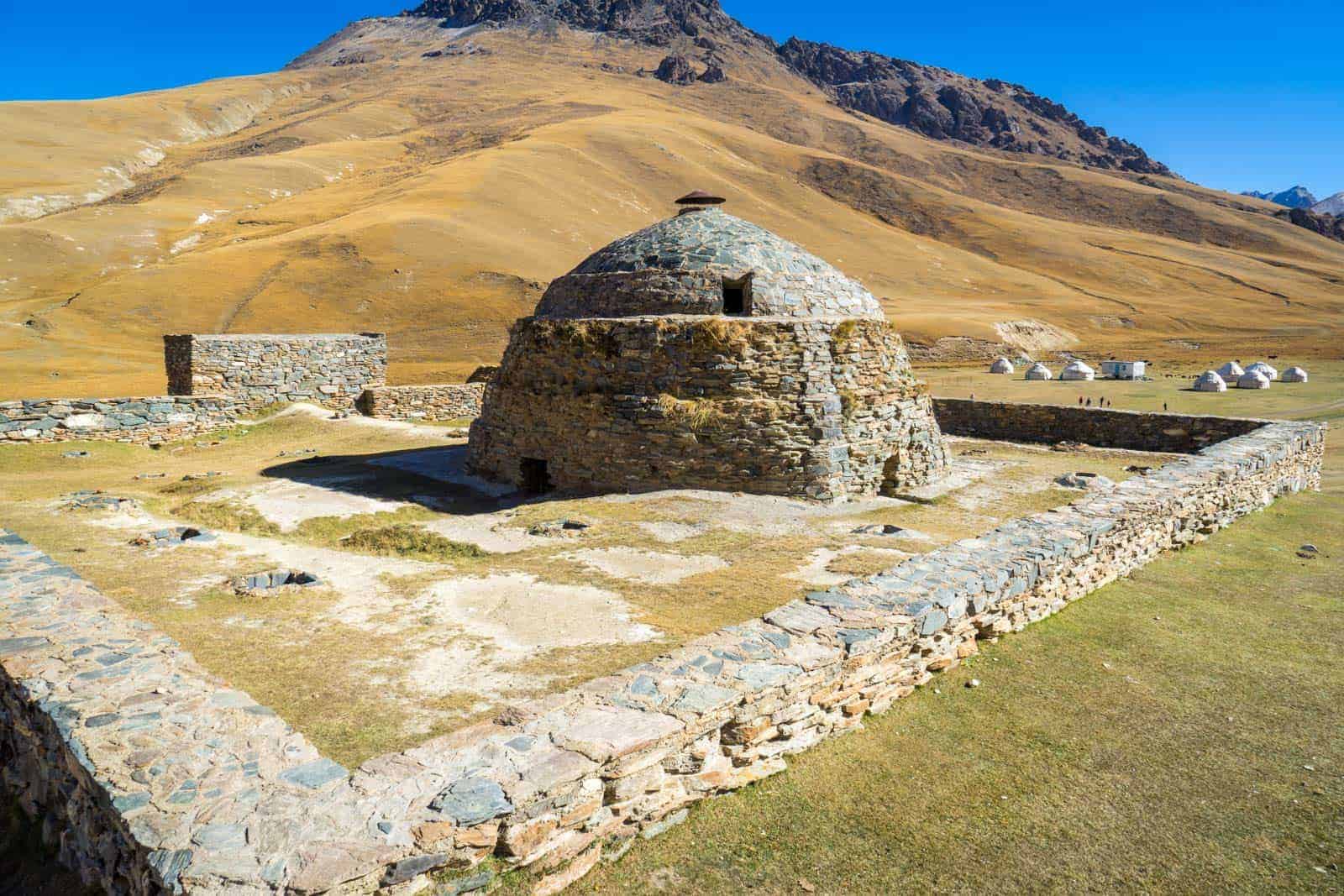 The Issyk Kul Lake is one of the major tourist attractions of the country. This lake is the tenth largest in the world by volume, and is also endorheic, meaning the lake does not flow into a sea or ocean.

The name Issyk Kul translates to “warm lake.” The lake is named so not because of warm water temperatures, but because the lake never freezes even while surrounded by ice-covered mountains.

The area around Issyk Kul is part of the ancient Silk Road – the trade route between Europe and Asia. Two thousand five hundred years ago, when the water levels were much lower, the shores of the lake were a major stopover for traders and travelers traversing the route. There has been extensive evidence on this claim, such as the remains of an Armenian monastery from the 14th century and artifacts and structures found at the bottom of the lake.

Tourists flock to IssykKulLake to swim and bathe in the many resorts located around it. Exploring the shores and hiking in the mountains surrounding the lake are also popular activities.

Tian Shan means “Celestial Mountains” – a fitting name for a mountain range that reaches to the heavens. Found in eastern Kyrgyzstan, the Tian Shan is a massive collection of ranges, glaciers, and summits, which is a natural combination of resounding might and flawless grace.

The Tian Shan reaches the borders of China and Kazakhstan, so hikers and mountaineers will never run out of locations to conquer. However, the Tian Shan, especially its Central area, is very treacherous for amateurs – only experts have the skill and confidence to conquer these mountains.

Located in the Tian Shan are Peak Pobedy (the second-highest peak in the whole former USSR at 7,439 meters; located at the Kyrgyzstan-China border), Khan Tengri (also known as the Prince of Spirits or the Ruler of the Sky at 7,010 meters; located at the Kyrgyzstan-Kazakhstan border), and the Inylchek Glacier (the range’s grandest glacier, with a length of 60 kilometers).

Tash Rabat is a former fortress and an aged caravansary – an inn that has large grounds to accommodate caravans of passing-by travelers. It has roughly 30 rooms, and its wide space and stone walls are being compared to those of a cloister, castle, and fortress. Used by travelers traversing the Silk Route, it once provided them with both a place of worship and of rest.

Tash Rabat has a very strategic location along the foothills of the Tien Shan mountain range, embedded in the hillside. Because of its location, tourists sometimes just pass by in their vehicles without realizing that they have missed such an incredible place.

To reach Tash Rabat, take a vehicle from Naryn, Bishkek, or Torugart. Once here, you can spend half a day exploring Tash Rabat, as it is a critical piece of history in Kyrgyzstan’s role in the Silk Route.

Irkeshtam Pass is a path that connects Kyrgyzstan to China, one of its allies. Technically, there are no documents or clearances required for people to enter through to either side. The Irkeshtam Pass is also important to Uzbekistan and Tajikistan because this is similarly their shortest route to China.

However, tourists are drawn to this pass not because of where it leads, but of what are seen while traveling on it. Travelers are treated to a wonderful picture of mountains and meadows, all filled with various greeneries. The route, though short compared to other roads, is made unforgettable by the view.

Before, travel in the IrkeshtamPass was limited for commercial trade. In 2002, however, it was opened to passenger traffic to boost tourism. It has been a popular destination ever since. Intensive repairs have been made in this path for maintenance purposes.

Arslanbob is the King of Forests in Kyrgyzstan. Spanning 600,000 hectares in the valley of the River Arslanbob, this area is known for its bountiful walnut harvests, with a yield of around 1,500 tons annually.

A story goes that Alexander the Great, upon his conquest of the region, brought an ample amount of nuts and fruits from Arslanbob to Greece. Since then, the walnuts of Kyrgyzstan have become Greek favorites, even earning them the name “Greek nuts.”

The Arslanbob forests are under government protection because of their importance to the Kyrgyz economy. Locals, likewise, do their best in the preservation of the forest products. Aside from walnuts, Arslanbob also produces bountiful harvests of cherry plums, pistachio nuts, and apples.

Tourist offices have been set up in the area and lodges have been put up, which allow you to enjoy the view of the forest through your room’s windows. You can even ride through the beautiful and captivating Arslanbob forest on horseback.

Altyn Arashan, located in the Ak Suu Valley, is known for both hot and cold springs situated in the area. Add to this attraction  the natural beauty of alpine forestry that surrounds the place and you get a tourist hotspot that’s as calm and refreshing as one can be.

Because of the area’s reclusive nature, tourists are recommended to go to Altyn Arashan on 4WD vehicles – an experience that is memorable by itself. Once there, visitors can go straight to the hot or cold springs, or go hiking through the trails. Trekkers can take the trails through Ala Kul Lake or the Djety Orguz valley. Trekking permits are required but are not difficult to obtain.

Other attractions in the area include a museum of stuffed animals that are found in the region, and the Arashan State Nature Reserve, which is famous for its extensive work on botanical research.

Karakol is a small, peaceful town that derived its name from a term meaning black hand or wrist, possibly referring to the hands of the early Russian peasants who migrated to the town that had been blackened due to the rich soil of the valley.

Karakol is a low-rise town that is characterized by Russian gingerbread cottages and towering white poplars shading the streets. The town is known for its bountiful apple harvest, grown in orchards surrounding Karakol.

Karakol is the best starting point for exploring both the Issyk Kul Lake and the Central Tian Shan, with hotels and inns that are very hospitable and accommodating to tourists. If possible, time your visit to Karakol on a Sunday, when most of the activities in the area happen, If you visit on a Sunday, you’ll catch the Sunday market, animal bazaar, and the Russian cathedral services.

Karakol might be small, but there’s nothing diminutive about the joy in the hearts of the people who live here.

Jeti-Öghüz is a village just 25 kilometers west of Karakol. It is one of the towns that are situated around Issyk Kul Lake. In fact, the village is just a short distance from the main road encircling Issyk Kul Lake.

If you go south from the village, you will see the earth rising out of the ground in red patches – red sandstone cliffs that have become a trademark of the town. In this area is the Razbitoye Serdtse hill, which means “Broken Heart.” The legend states that there were two suitors who killed each other here in a fight for the love of one woman, and this splintered hill is the broken heart of the woman.

On the other side of this hill is the massive Jeti-Öghüz wall. Jeti-Öghüz means “Seven Bulls,” and the valley is named so because of the seven main bluffs or hills. The story behind this name tells of seven calves who grew big and strong in this rich and wonderful valley, However, due to the erosion in the area that has taken a beating on these hills, it looks like the bulls have multiplied

Ala-Too Square is the main square of Bishkek – the capital of Kyrgyzstan. The beautiful façade of Ala-Too makes it a prime picture opportunity for tourists, as Bishkek is usually the first stop for people traveling to Kyrgyzstan. Right in the middle of the square is a statue of Vladimir Lenin, an important historical figure.

If you are lucky to be in Bishkek when there is a grand ceremony or event, the activities will most likely be held here in Ala-Too Square. The wide and open area of the square makes it conducive to big gatherings.

Just beside the square is the State’s Historical Museum, which features a collection of the most valuable and most meaningful treasures that Kyrgyzstan has to show. A trip to this museum will show you a snapshot of the country’s history and culture.

Burana Tower is the only remnant of the ancient city of Balasugin – a symbol of the fleeting nature of civilization.

The Burana Tower is 10 kilometers south of Tokmok, at the foot of Shamsy Valley. Balasugin was established in the 10th century and was renamed as Gobalik (“good city”) by Genghis Khan when he spared it from destruction. Balasugin disappeared by the 15th century. Archaeological digs in the area revealed former sites of a fortress, shops, bazaars, religious buildings, and homes, among others. They are all gone, leaving only the Burana Tower standing today.

It is believed that the Burana Tower is a minaret – an Islamic structure where the call to prayer is made five times a day. It was originally roughly 45 meters tall but is now only 25 meters, as an earthquake in the 15th century destroyed the tower’s top half.

Visiting the BuranaTower will give you a sense of the rich history of Kyrgyzstan, as well as an appreciation of our current civilization that is still standing. 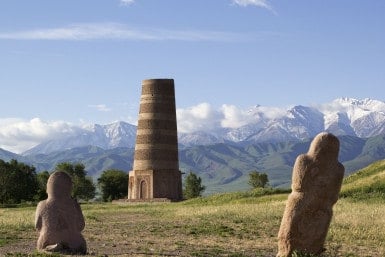 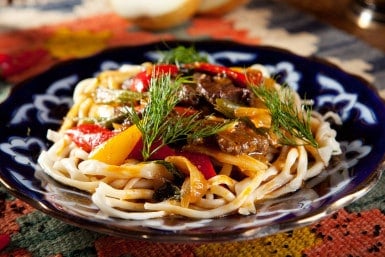 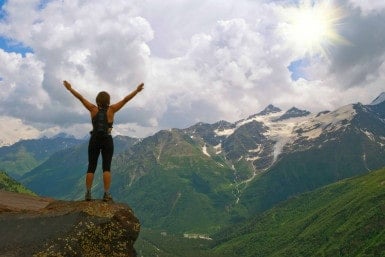