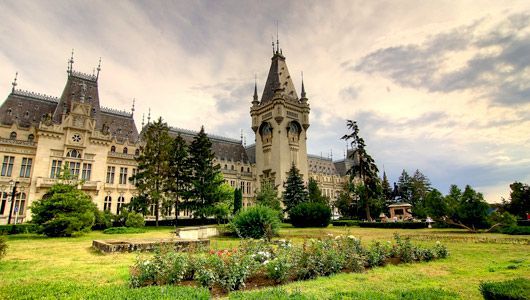 The Corvinesti Castle in Hunedoara is considered as the prime masterwork of Romanian Gothic architecture. The castle was constructed in 1409 as Hungarian King Sigismund of Luxembourg’s token of friendship to Romanian Prince Voicu.

The royal residence features towers with architectural designs as fancy as their own titles, such as the Maces’ Tower, the Capistrano Tower, and the intriguingly named Do Not Fear Tower. These towers manifest the castle’s architectural inspirations dating as far back to Medieval Europe.

At the heart of Corvinesti Castle is the majestic Knight’s Hall which is believed to have served as the reception and entertainment center of the complex. Another admirable enclosure inside the castle is the Council Hall where ancient portraits of Romanian rulers’ heraldic armors are on display.

The old castle also features a huge gallery, a 15th century chapel, and a safekeeping place for food items called the White Bulwark. The controversial indoor water spring, with an astonishing depth of 30 meters, is said to have been dug by three Turkish prisoners for 15 long years.

The Palace of Culture

The Palace of Culture in Iasi is Romania’s most prominent landmark, also serving as one of the largest bastions of history and knowledge in the country. Constructed in 1906, the complex is of European neo-Gothic architectural style, well embellished with fine aesthetic details.

At that time, the palace was the most modernized building in Romania, having electrical lighting, fireproof walls, compressed air heating, and a ventilation system.

The palace is comprised of The Art Museum, The Museum of Science and Technology, The History Museum of Moldavia, and The Ethnographical Museum of Moldavia – four of the most significant museums in Romania. An open-for-all municipal library is also established at the northern face of the complex.

Apart from the educational sections, the palace is also teeming with old chambers reflecting the culture and history of medieval Romania. The Gothic chamber features statues of Romanian mythical creatures, the Chamber of Voievozi displays portraits of Moldavian and Romanian rulers.

Different parts of the site are protected by stone figures such as a pair of archers guarding the interior walls and an eagle stationed at the palace’s entry.

A slightly smaller counterpart of Paris’ Triumphal Arch is Romania’s very own Arcul de Triumf, which towers over the busy streets of metropolitan Bucharest.

The existing arch along Kiseleff Road, however, is already the third version of the national pride maker. The original wooden arch was created hastily for the celebration of independence in 1878 and was replaced after World War I, only to be taken down once again 13 years later.

The current Triumphal Arch, launched in September 1936, is a stunning 27-meter monument of pure concrete and granite. It was designed by prime Romanian architect Petre Antonescu with a tastefully sculpted chief face collaborated on by some of the finest Romanian artists, including Dimitrie Paciurea, Costin Petrescu, Corneliu Medrea, Ion Jalea, and Constantin Baraschi.

The Rodna Mountains, which runs as part of the Carpathian Mountains in the northern region, is the center for mountain sports and winter activities in Romania. The mountain ridges are laden with compact snow during most of the year, including part of the summer season.

Its ridges span approximately 50 km from end to end, making it one of the longest mountain ranges in the country. Additionally, its peaks are also some of the highest, particularly the Ineu peak at 2,279 meters and the Pietrosul Rodnei at 2,303 meters above sea level.

During winter, the Rodna Mountains turn into a tourist hotspot, as one of the best venues for snow skiing. On the other hand, summer also draws a considerable number of mountain activity enthusiasts who trek the mountain’s wild terrains.

Most hikers engage in a 3- to 5-day climb up the peaks, whereas some enjoy spelunking in the mountain’s plunging caves. Among the famous caves found in the Rodna range is Izvorul Tausoarelor, one of Romania’s deepest caves, with a depth of 479 meters.

The Sphinx of Bucegi Platform

Romania’s most fascinating and most perplexing attraction is the Sphinx, which is erected on the Bucegi Platform. The stone formation apparently resembling a human face is believed to be a figure of the god of the ancient Pelasgian tribes.

Some historical analysts suggest that the 2216-meter Sphinx is the inspiration for the world-renowned Great Sphinx in Giza, Egypt. Both formations are roughly of the same size and exhibit physical resemblances with an ancient sculpture of Zeus.

The Romanian Sphinx is guarded by three other mushroom-like stone figures dubbed as the Cyclopean Altars from the Caraiman. These rock formations standing at 3.5 meters are locally referred to as the Old Women, or Babele.

The origin of these stone figures on the Bucegi Platform is still under intense speculation. Although researchers have introduced scientific and geological explanations, some Romanians still believe the formations were caused by supernatural phenomena.

It was widely believed that the complex served as the residence of bloodthirsty Romanian general Vlad Tepes, from whom the character of the popular fictional vampire was patterned.

However, it was later resolved that it was more likely that the ruler only hid in the castle’s underground prison for a couple of days.

The site, originally built by Saxons in 1377, initially served as a defensive station to protect the southern boundaries of Bran.

Between the early 18th century and the early 20th century, the castle served as the administrative center of the city and the formal residence of the Romanian royalties. One of the prominent occupants of the castle was Queen Marie, who resided in the complex in 1920.

Presently, Dracula’s Castle has been reinvented into the Museum of Medieval History. The museum opened to the public in 1956 following the trouncing of the royal clan in 1947.

One of Romania’s most enduring religious, historical and cultural sites is the Capriana Monastery in Moldova. Constructed in1429, the church has survived natural and man-inflicted tragedies alike, earning a close association with the mythical self-resurrecting Phoenix.

The monastery is of Romanian Orthodox influences with prominent manifestations of medieval Moldavian architectural design. Capriana Monastery is an artistic collaboration of some of Moldova’s finest engineers and workers.

The site first served as the formal residence of Moldova’s royal leaders before it was converted into a religious site. The complex now features three distinct churches, a double-storey building for dwelling, cells, and small toilet enclosures.

A prominent attraction within the ancient Capriana Monastery is one of the biggest libraries in Moldova, which also houses authentic presents from some of the most celebrated Romanian leaders.

The Bridge of Liars

The bridge is the first ever in Romania to be forged from iron materials and only the second in all of Europe. Some say the bridge got its name because it was a popular to visit for lovers – so a lot of lies have been uttered there.

The current cast-iron bridge built by renowned engineer Fredericus Hutte replaced the original wooden bridge in 1859 and was publicly launched on the succeeding year.

The body of the bridge is uniquely adorned with flowers and plants encased within carriers of various geometric designs. Accenting the iron bridge are four stone columns located at the utmost edges, while a gothic metal railing runs across the span of the architecture.

Presently, the Bridge of Liars is a popular meeting place and leisure destination for Romanians, especially for couples and youngsters.

The Romanian Athenaeum located at the capital is Romania’s frontliner among entertainment and musical venues. The athenaeum is a neo-classical inspired concert chamber with fine acoustic sounds perfect for listening to classical music.

The gigantic Greek temple-like musical hall was designed by French architect Albert Galleron and was opened to the public in 1886.

The interior is equally artistic with vast halls watched over by more sculptures and paintings created by famous Romanian artists. A major scene stealer is the building’s elegant foyer, which is accented by four winding marble staircases.

The Romanian athenaeum hosts important cultural undertakings such as conventions, exhibits, and symphonic performances of celebrated artists such as the Romanian Philharmonic. The halls of the athenaeum can accommodate up to 600 people, with 52 additional seats at the chalet.

The Romanian Palace of Parliament

Apart from historical and cultural sites, Romania also boasts of world-class skyscrapers – the Palace of Parliament being on top of the list. The palace reigns as one of the tallest structures in the capital.

Former Romanian tyrant Nicolae Ceausescu created the 12-storey 1,100-room “House of the People” on an artificial knoll. A section of the palace hosts the parliament of Romania, along with a museum and convention chamber.

Inside, the building elicits an ambience of elegance and formality with its gilded ceilings accentuated by elegant chandelier sets. A huge veranda also offers a panoramic view of the palace’s green surroundings.

The Palace of Parliament offers paid public tours for everyone to enjoy its magnificent architecture and interior design. 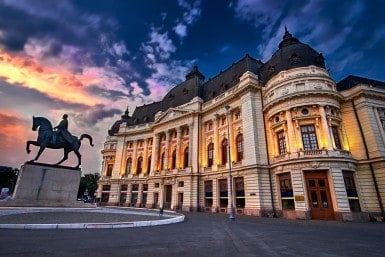 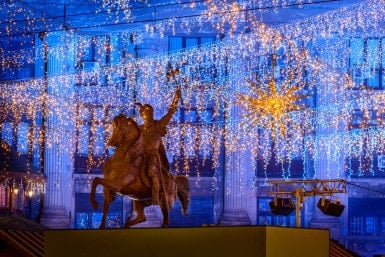