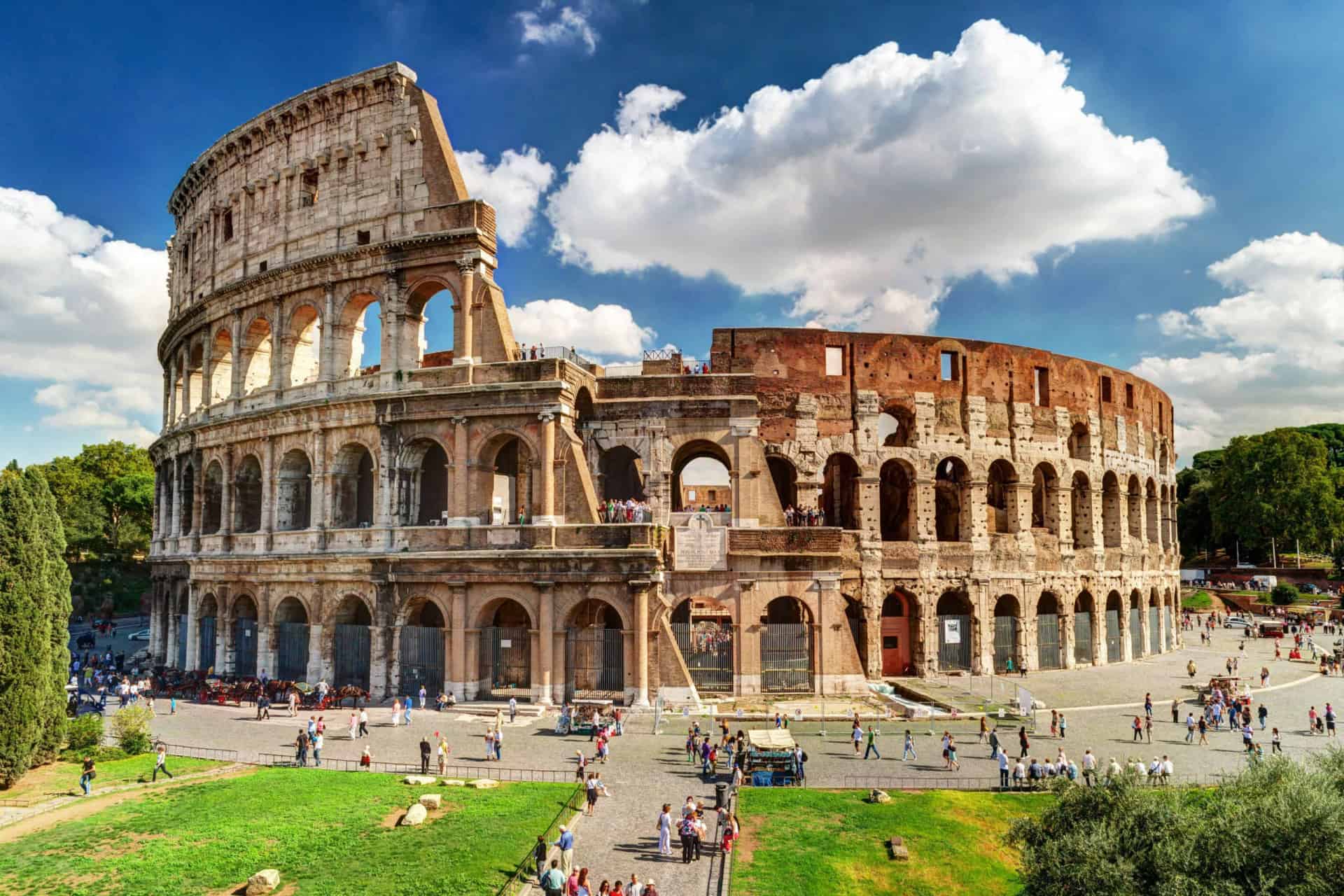 The capital Rome is filled with ancient ruins, palaces, daunting churches and world-class museums. Within the historic center lies the Forum, which was the assembly place during the golden age of the Roman Empire. Close by are ageless monuments such as the Spanish Steps, Piazza Navona, the Pantheon, and the Colosseum.

Trevi Fountain is a destination for both the hopeless romantics and the lovelorn. Toss some coins into it to gain some luck in love. It is also an age-old custom to make a wish on the fountain for another fruitful visit to Rome.

More highlights along the tourist trail include Castle Sant’Angelo, an old fortress and mausoleum, and the Capuchin cemetery. Rome has an excellent range of museums, but if you are pressed for time, spend your day at Galleria Borghese. Marvel at the works of Bernini, Raphael, Caravaggio, and other Renaissance masters. Explore the grounds of Villa Borghese Park with its enchanting landscape.

Right across Tiber River is Vatican City, where more cultural icons can be found. Around St. Peter’s Square is a bevy of museums offering priceless artifacts and masterpieces. St. Peter’s Basilica casts an authoritative figure in the middle of the square. Lastly, find Michelangelo’s frescos in the ceilings of the Sistine Chapel.

The largest city in Lombardy region, Milan has an unquenchable thirst for finance and the high life. Home to the stock market and the much-awaited yearly sortie, the Milan Fashion Week, the city basks in a sophisticated cultural climate.

Milan’s skyline is dominated by the Gothic spires of the Cathedral. The structure remains a great trademark of the city, its intricate details creating a stunning silhouette in Milan. Of equal importance is Basilica Sant’Ambrogio, which houses the tomb of the city’s patron saint, St. Ambrose. Rounding up the city’s architectural wonders are Sforzesco Castle and La Scala Theater.

While in Milan, you must not miss the chance to see Leonardo Da Vinci’s “Last Supper,” which is on display at the Santa Maria Delle Grazie convent. Inside the Museum of Historic Art in Sforzesco Castle is Michelangelo’s “Pieta De Rondanini.”

Heavenly shopping awaits at Via Montenapoleone, an area filled with clusters of the trendiest boutiques such as Dolce & Gabbana, Prada, and Ferragamo. Another Milanese shopping icon is Galleria Vittorio Emanuele, one of the oldest malls in the world. The glass-roofed Neo-Classical building is a constant source of amazement for visitors.

Naples is a port city located in Southern Italy and is the gateway to explorations in Pompeii and Bay of Naples. The vibrant skyline includes Mount Vesuvius, one of Italy’s most famous volcanoes. Amalfi Coast is another popular getaway that is accessible from Naples.

The heart of Naples is definitely its historic center. The San Gennaro Cathedral stands as the focal point of the heritage district. Worthwhile visits to churches of Gesu Nuovo, San Domenico Maggiore, and San Lorenzo Maggiore are part of the Napoli sightseeing route.

Making your way through the narrow alleys might lead you to Via San Gregorio Armeno, the area famous for Naples’ nativity-scene makers. Needless to say, during Christmas, the shops become dotted with tourists fascinated at the skillful renditions of the Nativity scene.

Unknown to many, the Tuscan city of Pisa has the humble origins of a seaside settlement from 3,000 years ago. Pisa’s most recognizable trademark, the Leaning Tower, is just one of the many historical and cultural highlights waiting to be discovered.

Pisa’s most significant showcase of monuments can be found on a green lawn referred to as Piazza dei Miracoli, or “the Square of Miracles.” Standing beside the Leaning Tower is a five-naved cathedral dedicated to Santa Maria Assunta; it was constructed back in 1064. Near the cathedral is the baptistery, the largest one in the country, measuring 107.25 meters in circumference.

Close by is the walled structure of Camposanto, or Holy Field, one of the world’s most breathtaking cemeteries dating back to 1278. Just a short walk from the tower is Orto Botanico di Pisa, founded in the 1500s, which makes it one of Europe’s oldest botanical gardens.

Firenze, or Florence, takes immense pride in its cultural heritage; it is a treasure trove of historic attractions.

The city gave birth to the Renaissance movement, serving as the cradle to a momentous phase in the world of art. The Cathedral of Florence, Santa Maria dei Fiore, is a highly recognizable landmark in the city, especially with its distinguished brick-red Renaissance dome. You’ll see more of the Renaissance masters when you go to Uffizi Museum, but be prepared to take on the long queues as it is the most visited museum in Florence.

Another church that ranks high among tourists is the Santa Croce, which is the resting place for many illustrious Florentine personalities. Pay respects to the likes of Michelangelo, Machiavelli, Rossini, and Galileo, who are all buried in the church. Santa Maria Novella and Medici Chapels are two more churches that capture the artistic passion of Florence.

The fair city of Verona was the setting of one of the greatest ill-fated romances immortalized in literature. Literary fans of William Shakespeare’s “Romeo and Juliet” never miss a chance to visit Juliet’s House and gaze up the balcony, awestruck and misty-eyed.

Verona can offer more than just romantic sights associated with the star-crossed lovers. Enjoy some of the best views of the city from two popular bridges, the Ponte Scaligero and the Ponte Pietra. Ponte Scaligero is also called Castelvecchio Bridge and runs across the Adige River. Piazza delle Erbe is a bustling hive of activity filled with lovely eateries and a marketplace.

The city has its own share of magnificent churches, such as the Verona Cathedral and the Church of San Fermo Maggiore. These structures provide an ideal study on Romanesque and Gothic architectural styles.

Verona Arena, on the other hand, is Italy’s biggest opera theater, accommodating up to 15,000 people during cultural events and concerts.

It is not difficult to see why this city in northeastern Italy was once called La Serenissima, or the Most Serene Republic of Venice. With over a hundred canals and some 400 bridges, Venice evokes a very calm and inspiring atmosphere like no other city in Italy.

The main waterway, the Grand Canal, is the perfect vantage point from which to make sense of the maze-like layout that can leave first-time visitors in a bind. Much of the tourist activity revolves around this area due to the iconic Venetian landmarks found within.

St. Mark’s Square is the heart of Venice and home to the Palazzo Ducale and Basilica di San Marco. There are more points of interest beyond the square, including the Museo del Risorgimento, the Archaeological Museum, and Torre dell’Orologio.

Cultivate an appreciation for fine works of art from the 14th to 18th centuries housed inside the Gallerie dell’Academia. Contemporary art pieces included in the Peggy Guggenheim Collection make it a popular stop in cultural journeys in Venice.

Separated from the mainland, Sicily is one of the biggest islands found in the Mediterranean Sea. It has a bountiful range of natural attractions and diverse architecture in the key cities.

The capital of Palermo holds ancient buildings, museums, and monuments dating back to periods of the Arab and Norman conquests. Its largest museum, the Galleria Regionale, boasts medieval works and is housed in Gothic-style Palazzo Abatellis. Sicily’s renowned puppet makers showcase their work in the Marionette Museum. The 12th century Monreale Cathedral, Solanto’s Roman ruins, and Palazzo Mirto are all must-see attractions in Palermo.

Located in the Emilia-Romagna region, Bologna is defined by its red-brick buildings, plentiful palazzos, and two ancient towers.

Bologna attractions are concentrated around the two main squares called Piazza Maggiore and Plaza Nettuno, in which you can find the famous fountain of Neptune.

The Basilica di San Petronio is one of Bologna’s biggest churches; it has fascinating frescoes to show.

Collections of relics, artifacts, and other cultural displays are showcased at the Museo Civico Archeologico and Pinacoteca Nazionale di Bologna.

The towers Due Torri were constructed in 1119. The tallest tower is Torre degli Asinelli, measuring more than 97 meters in height. Torre Garisenda stands at around 48 meters and is well recognized due to its inclusion in Dante iconic work, “Inferno.”

For many centuries now, Genoa has been an important harbor city due to its location in northwestern Italy. The cityscape’s most prominent feature is the seafront lined with a neat row of pastel-colored buildings that are centuries old.

The city was home once to Christopher Columbus, as one can surmise with a visit to Casa della Famiglia Colombo. Genoa’s cathedral, Cattedrale di San Lorenzo, strikes a daunting image with its combination of Renaissance and Gothic styles.

Near the cathedral is Palazzo Ducale. The alleys in which the wealthy Genovese families live are filled with more churches and specialty shops.

Genoa is also famous for its awesome display of houses of nobilities who once ruled the city. In particular, three palaces stand out: Palazzo Rosso, Palazzo Bianco, and Palazzo Tursi – collectively known as Musei di Strada Nuova – are elegantly restored, and they house many of the city’s best art pieces.

Lastly, there are more amusement options to be had in Porto Antico, or the Old Port. Families can head to the Genoa Aquarium and treat themselves to local fare in any of the seafront restaurants. 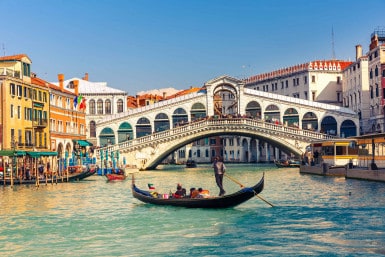 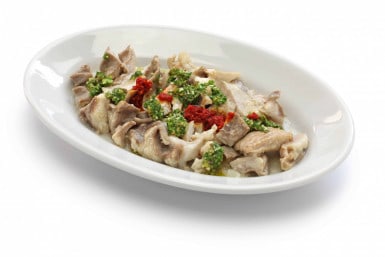 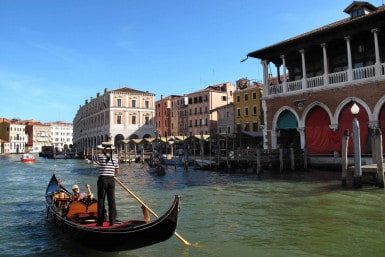