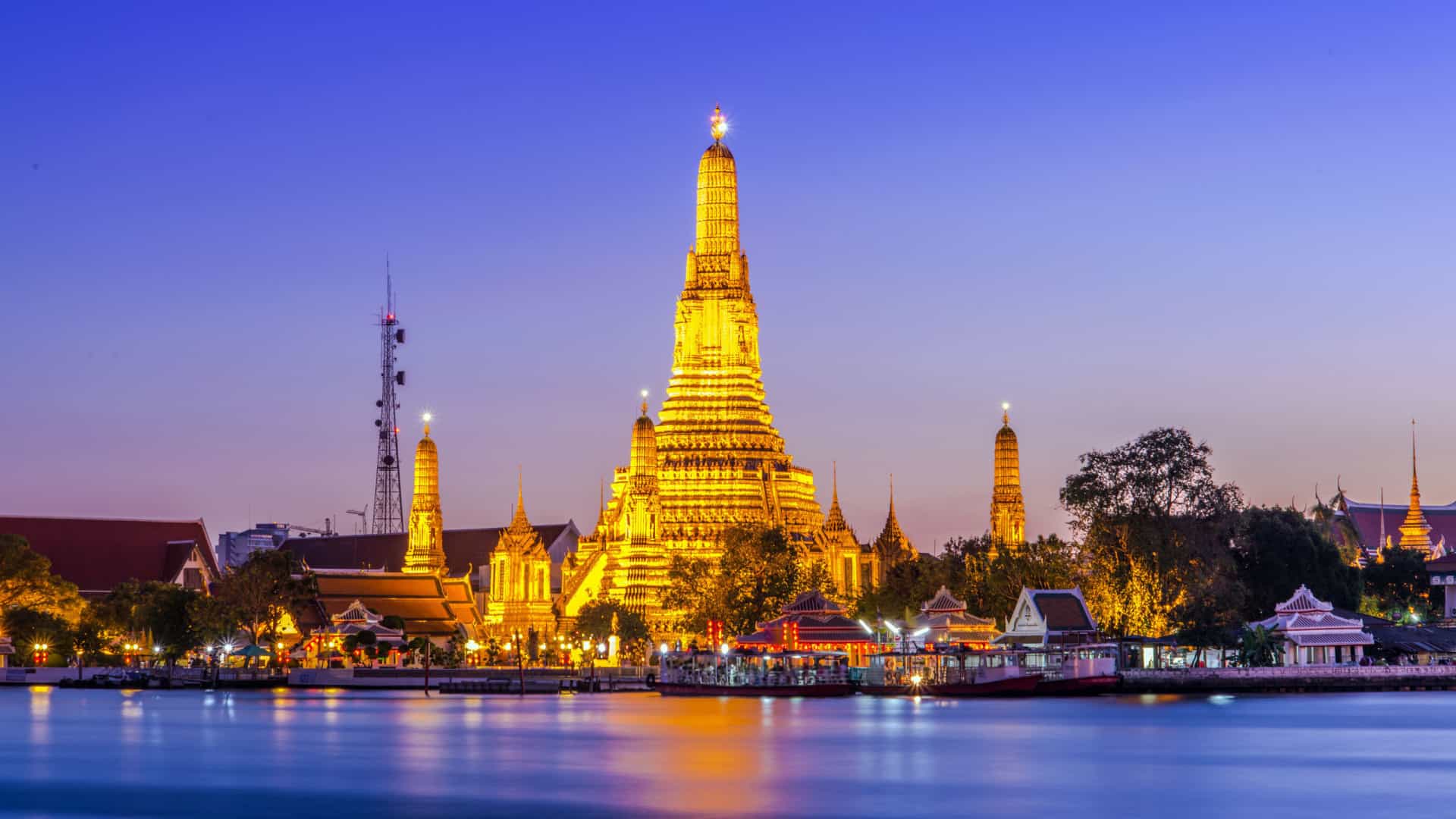 Where to Go in Thailand

A whole day in the capital is not enough to feel its incomparable character. Whether it’s shopping or sightseeing, recreational activities in Bangkok abound for a jam-packed itinerary in the city.

An ideal day starts with a ride in the water taxis that ply the length of Chao Phraya River. Hop off to any of the delightful stops along the way, including the complex of the Grand Palace. Don’t miss the equally elaborate architecture of temples around Bangkok, such as Temple of Dawn, Temple of Reclining Buddha, Temple of the Emerald Buddha and Temple of the Golden Buddha.

There’s only one way to escape the sweltering heat in Bangkok during mid-day: Hit the shopping malls for posh designer brands in Siam Paragon, Emporium and Gaysorn Plaza. Aim for bargain finds at Platinum Mall, Siam Square and Pratunam’s wholesale stores. If you’re in the city on a weekend, don’t miss out on dirt-cheap apparel, home décor, and other interesting finds within the maze-like Jatujak Weekend Market.

If you’re in need of unwinding as the sun sets, Bangkok has its famous nightlife in Patpong and Nana. As for accommodations, there is a wide range of hotels, from budget inns to 5-star luxury hotels around the city.

Located 86 kilometers (53 miles) north of the capital, Ayutthaya is one of the most popular day trips for people who are coming from Bangkok. This ancient city was the old capital of Thailand until 1767. Temples within the area date back to the 1300. Hop onboard a long tail boat to immerse yourself in the historical structures that are reminiscent of bygone eras in Thailand. Foremost on the list of attractions are Bang Pa-In Palace, Wat Chaiwatthanaram, Ancient Palace, and Wat Yai Chai Mongkol.

Dubbed as Rose of the North, Chiang Mai is the toast of northern Thailand. Its balmy weather, national parks and tribal villages draw tourists at any given time. During the cold months, the misty mountains create a breathtaking backdrop, which inspires visitors to further explore the many sights of this ancient city, which was established in 1296.

Attractions in Chiang Mai include spiritually important places such as Doi Suthep, a fine representative of northern Thailand’s Lanna culture, and Wat Chedi Luang, a temple with a massive pagoda that rises to a height of 80 meters.

For a rich sampling of the country’s wildlife, include a visit to Mae Sa Elephant Camp, Chiang Mai Zoo, and Chiang Mai Night Safari. Challenge yourself to climb the highest peak in the country, found in Doi Inthanon, which rises 2,565 meters above sea level.

Take a peek into the daily life of the indigenous tribes with a visit to Doi Pui Tribal Village and the Long Neck Karen hill tribes near Chiang Dao Cave. Bring home finely handcrafted parasols from Bo Sang Village, less than 10 kilometers from downtown Chiang Mai, and the popular Night Bazaar.

Chiang Rai is yet another cultural gem found in northern Thailand. The city feels more bucolic and relaxed than Chiang Mai and has its own host of historical attractions. Here you’ll be offered more of the rich traditions of the Lanna culture, through the numerous architectural highlights.

At the heart of the Chiang Rai’s spiritual foundation is the King Mengrai the Great Monument. This landmark is dedicated to the founder of the Lanna Kingdom and is defined by its three giant golden flags. The ornate Wat Klang Wieng impresses with its spectacular design and striking red façade. The original site of Bangkok’s Emerald Buddha is contained in Chiang Rai’s Wat Phra Kaew. Sitting high atop a hill is Wat Phra That Doi Chom Thong, overlooking Kok River. The structure is even older than the Lanna Kingdom itself, having been established in the 10th century.

A contemporary but very striking landmark in Chang Rai is the all-white Wat Rong Khun temple. Built in 1997, this temple has become one of the most prominent tourist attractions in Chiang Rai.

Pattaya is the nearest beach haven to Bangkok, which is only 147 kilometers (91 miles) away. The coastal city brims with endless options for sightseeing, entertainment, shopping and dining. The popular Pattaya Beach is perennially abuzz with lively activities. Grab a beach chair and enjoy the relaxing scenery while being pampered by inexpensive spot massages near the beach. The straight coastline of Jomtien Beach makes it ideal for water sports. Naklua and Wong Amat offer a more quiet pace, if the bustle of the bars and restaurants in the main drag become too much for you.

The ultimate luxury beach holiday awaits at Phuket, located in the Andaman Sea. This bejeweled island retreat holds plenty of scintillating options for those who seek the finer things in recreation.

Beach lovers are enamored with Phuket’s legendary beaches. Who can blame them, when you see the stunning sandy playgrounds and clear waters?

Patong Beach is the most popular beach in Phuket, with a wealth of shopping spots, restaurants, bars, and entertainment places.

The emerald water of Kamala Beach is more serene with its long stretch of beach remaining free from crowds and revelers.

Spending time in Phuket allows adventure seekers yet more options to indulge in nature’s bountiful wonders. From the northern end of Phuket, take a boat to one of the most captivating sceneries in the country, Phang Nga Bay, where you’ll see James Bond Island and Sea Gypsy Island. Golf enthusiasts will likewise find Phuket an ideal playground, with world-class golf resorts in tow.

Koh Samui is located in Surat Thani province, on the southern region of Thailand. It has various beaches lining its eastern and southern coasts. The two most famous destinations of beach-worshippers are Chaweng and Lamai.

Krabi is an astounding province that captures the imagination of those seeking a remote tranquil getaway. White sand beaches, secret coves, limestone cliffs, waterfalls, and lush jungles create a mesmerizing itinerary for the escapists and adrenaline junkies.

Ao Nang Beach and Nopparathara Beach rank high among tourists due to their fascinating seascapes. Railay Beach, however, earns more votes because it is cut off from the mainland.

Five-star resort hotels dot Klong Muang Beach, which holds an idyllic charm. Koh Lanta, located south of Krabi town, is another laidback island that continues to gain quite a following.

Southwest of Krabi lies one of Thailand’s most treasured attractions: the Phi Phi Islands. These islands are part of a well-protected national park, where the sole mode of transportation is the long tail boat because there are no roads. The bigger island, Phi Phi Don, boasts fine sandy beaches, limestone cliffs and intimate coves. Phi Phi Leh is smaller and offers turquoise waters, caves, and several bays. Depart from either Krabi or Phuket to start your escapades in Phi Phi Islands.

Where do members of the royal family go to escape the daily stresses of living in the capital? They seek respite 190 kilometers (118 miles) away, in Hua Hin. More famously known as a golf destination, the town also has crystal clear waters and lovely white sand beaches. It can get crowded during weekends as it is the ideal short city break to soothe the tired senses. The nearby seaside towns of Pranburi and Cha-Am should not be missed either, for their pristine beaches and quiet atmosphere.

Kanchanaburi may be famous because of the Bridge of the River Kwai and other World War II attractions, but the province has more to offer – from national parks to impressive waterfalls.

Bordering Myanmar, Kanchanaburi is only a two-hour bus ride from Bangkok.

The province is home to Sai Yok National Park, a massive 500-square-kilometer verdant forest filled with bamboo and teakwood. At the heart of this luscious jungle are two magnificent wonders: Sai Yok Waterfalls and Erawan Waterfalls. The park provides recreational options such as trekking, elephant riding, canoeing and cave exploration. 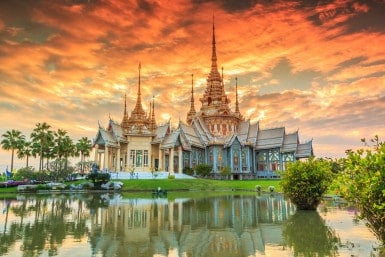 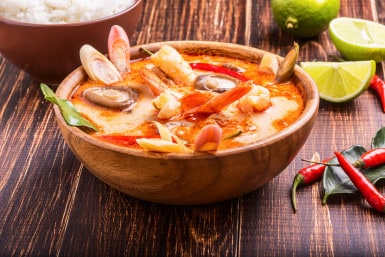 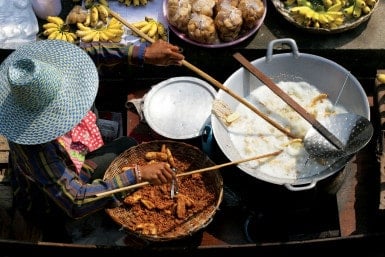 What to Do in Thailand