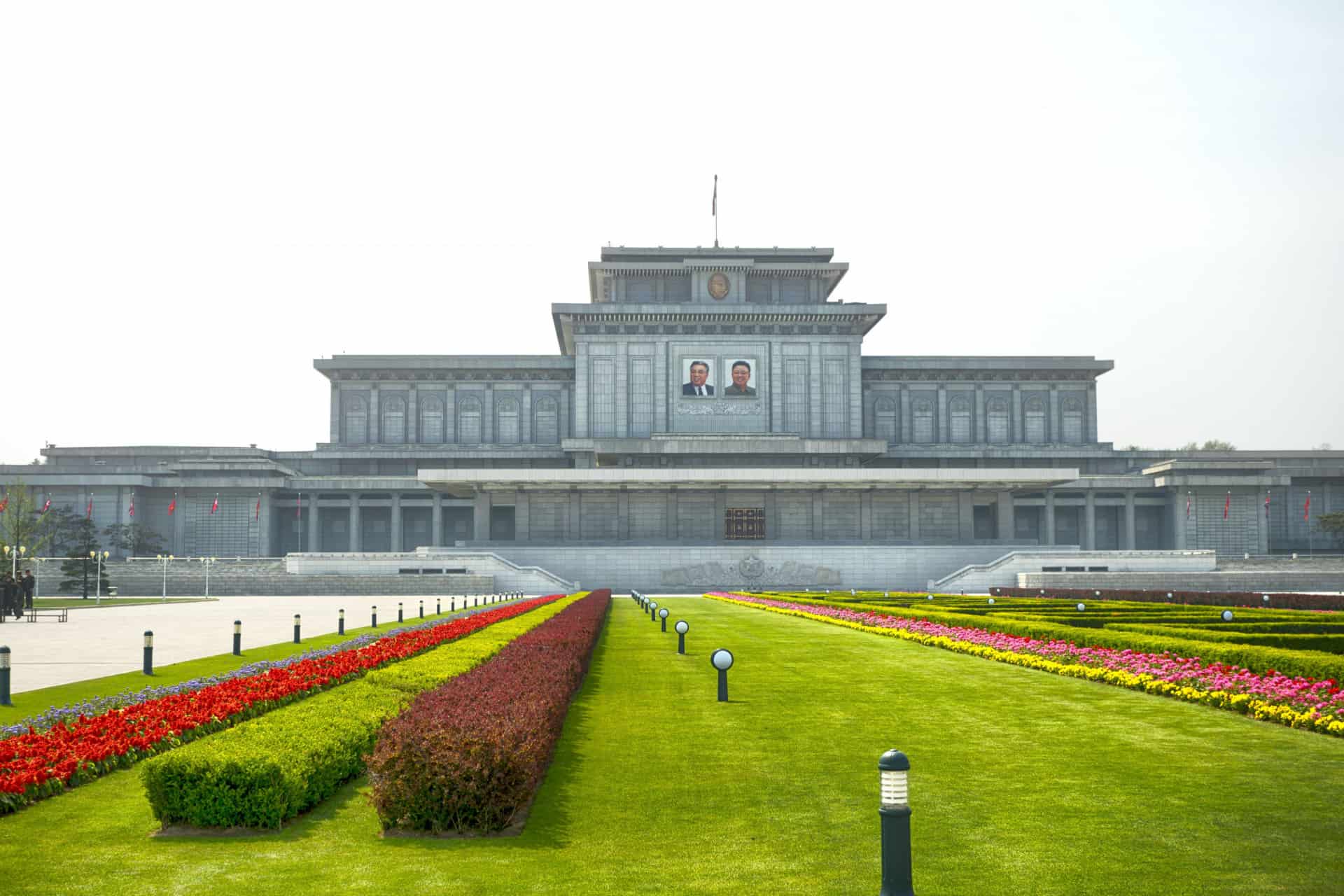 Pyongyang is the national capital of North Korea. It is located on the west-central region of the country, on Taedong River.

The International airport of Pyongyang serves various international airlines, with Beijing,China, being the main stopover for flights. There are also trains from China that will take you to the Pyongyang train station.

There are many interesting landmarks inPyongyang. These include the giant bronze statue of Great Leader Kim Il-Sung at Mansudae, theJucheTower, the Ryugyong Hotel, Children’s Palace, the Arch of Triumph, the USS Pueblo, the Korean War Museum, among many others.

As the capital,Pyongyangis the city that is most filled with tourist spots and landmarks. However, as with any place inNorth Korea, tour guides are required at all times. In fact,Pyongyangwill most likely be your first and last destination in yourNorth Koreatrip, so you’ll have lots of time to take in the sights and sounds of the city.

The Juche Tower is a 170-meter-tall monument in Pyongyang. This monument is the world’s 2nd highest monumental column, and it was completed in 1982.

Juche is the philosophy introduced by Kim Il-Sung. It means self-reliance, and this philosophy has guided the nation’s development since then. Officially known as the Tower of the Juche Idea, it commemorates a philosophy that has become a way of life for North Koreans.

The monument contains 25,550 stone blocks (one for each day of Kim Il-Sung’s 70-year life). It is illuminated by a metal torch at night, and visitors can ascend the tower through a lift. There is a platform just below the torch, which offers a breathtaking view of Pyongyang.

It is amazing to see a whole nation revering an idea so much, and this monument just goes to show what an idea can do to change the way a country works.

Much has been documented about the tension and conflict between North Korea and South Korea. While their differences seem irreconcilable, there are signs that both countries hope to one day come to a resolution for one united Korea, that a reunified Koreais still in the minds and hearts of their people.

One sign is the Reunification Arch that is located in Pyongyang. The structure was built in 2001 as a commemoration of the proposals for Korean Unification by the late eternal president Kim Il-Sung. The arch towers over the city, and it contains a map of the unified Korea.

When you visit the Reunification Arch, you will be immersed in an atmosphere whose mindset is almost completely different from that of nearly the rest of North Korea.

There might not be a reunification of North and South Korea any time soon. However, the hope of reunification, no matter how faint, is immortalized by this monument.

Panmunjom is the DMZ – the demilitarized zone – that serves as the boundary between North Korea and South Korea. A visit to Panmunjom gives you the chance to hear the story between the two countries from a point of view that is much less known by many – that of North Korea.

When you arrive atPanmunjom, a North Korean soldier will promptly join you and your tour guide, and this soldier will not leave your side until you leave the DMZ. Tourists will also be given a briefing on the agreements made between the two countries at the end of the 1953 Korean War.

Once you are taken to the border line, you will most probably see tourists from the otherKorea. You will even be given a chance to step intoSouth Korea, albeit for a very limited period of time.

The Korean War ended more than 50 years ago, but the tension between the two countries is still very much present. Nowhere does this tension hang more heavily than over the entirety ofPanmunjom.

If you love to hike and love nature, make sure that Myohyangsan is part of your itinerary in your North Korean adventure. It is only 120km (75 miles) northeast of Pyongyang, which makes it very accessible from the city.

Myohyangsan, which literally translates to “exotic fragrant mountain,” is one ofNorth Korea’s best hiking spots – a recognition made more impressive when you consider that most of the country is in fact composed of mountainous regions. A hike through Myohyangsan treats you to beautiful sceneries of waterfalls, forestry, and Buddhist pagodas – scenes that are unique toNorth Korea.

In Myohyangsan, you will also find the Exhibition Center– a center that holds thousands of gifts that were given to both Kim Il-Sung and Kim Jong-Il. Its 4-ton bronze doors add to the prestige and grandeur of the center.

A simple hike or stroll in Myohyangsan will make you appreciate the fact thatNorth Koreais still very much untainted, as the location is as close to nature as you can get.

Wonsan is a port city that is found at the southeastern region of North Korea. One of the most popular destinations in the country, Wonsan is a city that will cater to your needs for rest and recreation.

The Songdowon area, in particular, is known for its long stretches of beaches with crystal clear waters – perfect for swimming and other enjoyable water activities. The expansive pine plantations in the area add to its natural beauty.

Additionally, the city is a sightseeing point because of the many landmarks that you can view while you’re there. Some of these landmarks areMt.Kumgang,SijungLake, Chongsokjon, and Myongsasimni. All of them are pretty much in plain sight, and there are transportation services that can take you to them if you wish to take a closer look.

In Wonsan, the beaches are accessible from everywhere, and there are a lot of things to do. Staying in this port city for only a day or two gives you not enough time to fully enjoy what Wonsan has to offer.

One of the most beautiful lakes you will ever set your eyes on, Sijung Lake has captivated every tourist that has seen it.

The lake is a 48-km ride away fromWonsan, but the trip is minimal compared to the breathtaking view that awaits you. The lake occupies a 3-sq-km area, and it is 3.5 meters deep. The lake even has a sandy beach, and there is an option to go swimming in its placid waters.

Tourists flock the lake because even if you don’t plan to swim in it, the mere sight of its beauty can already free you from any stress you may have – which is the whole point of taking a vacation.

Kumgangsan, or Mt. Kumgang, is also known as Geumgangsan, or Mt.Geumgang. Its name can be translated to mean Diamond Mountain– a nod to its brilliant, sparkling cliffs among the mountains of North Korea.

The mountain is located in Kangwon-do, and it is 1,638 meters high. One of the most popular mountains in North Korea, a hike in Kumgangsan will show you numerous breathtaking views as you scale its massive frame.

TheKuryongFalls, a 74-meter waterfall, is one of the most famous sights found in the mountain. It’s a magnificent sight that you can’t see anywhere else, and to add to its mystique, there is a story the locals tell of nine dragons that used to live in the pool at this mountain’s feet.

The Kumsusan Memorial Palace, located in Pyongyang, is one of the most respected and revered sites in North Korea. This is because this memorial palace is dedicated to Kim Il-Sung,North Korea’s Eternal Leader.

The memorial palace used to be Kim Il-Sung’s main residence. Now it is his mausoleum. There are a lot of security checks that you must go through before entering Kumsusan, and the soldiers keep watchful eyes in every room.

Visitors bow to a giant marble statue of Kim Il-Sung in the first room of the memorial palace. They are then led to a special room where dust particles are removed before they can be allowed to enter the room where Kim Il-Sung’s body is located. Visitors then bow to Kim Il-Sung’s body from all sides of the glass box where the body is placed.

The memorial palace also holds Kim Il-Sung’s personal items such as his Mercedes car, his bullet proof raincoat, and other gifts he had received.

You will feel just how important their Eternal Leader is to North Koreans, and that can be summed up in the saying posted at the large square in front of the memorial palace: “The Great Leader Comrade Kim Il-Sung Will Always Be With Us.”

Paektusan is an extinct volcano with a magnificent crater lake at its center. Its significance in Korean mythology makes it sacred to North Koreans.

It is believed that this site is where “the Son of the Lord of Heaven” descended to our world, and he subsequently established the first Korean kingdom. This myth is the reason why the crater lake at the summit of the mountain is called Chonji, or “theLakeofHeaven.”

Paektusan towers over North Korea at 2,744 meters (9000 feet) – the highest peak in the country. The mountain also has a Chinese side, and tourists also have the option of visiting this mountain from China. The Lake of Heaven, on the other hand, has an area of 9.82 sq km, with an average depth of 213 meters. From October to June, the lake is frozen, covered in ice. 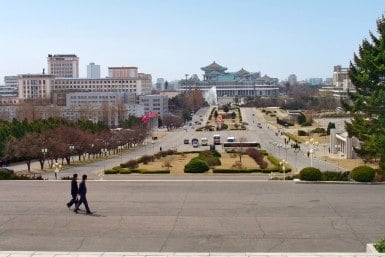 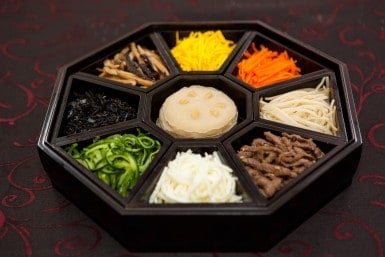 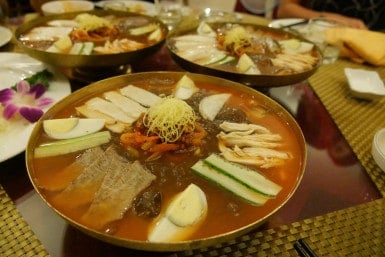