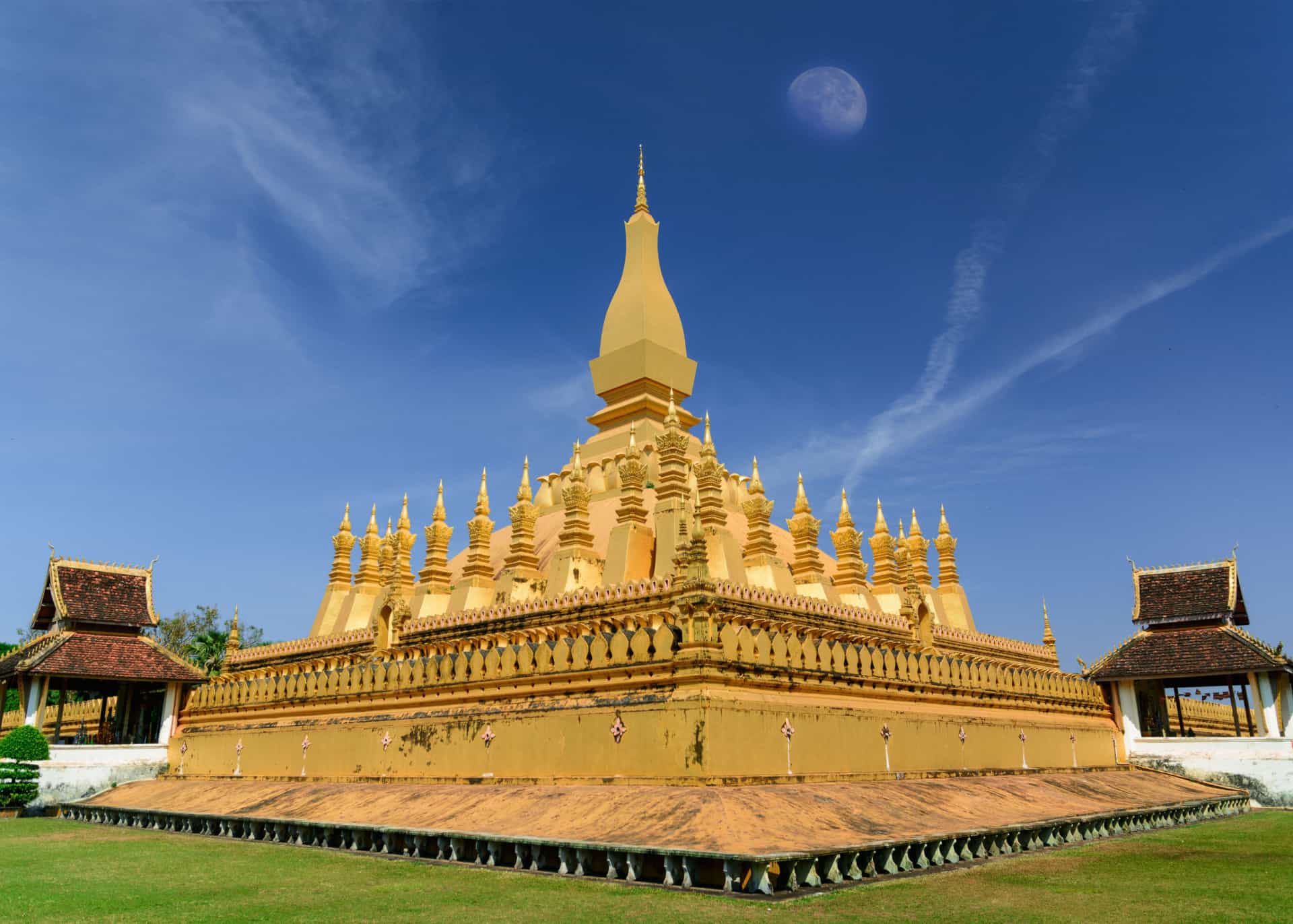 Where to go in Laos

Vientiane is Laos’ capital city, and yet it is far different from all other national hubs. Instead of booming with trade and industry, Vientiane’s streets bloom with lovely bougainvillea flowers. No high business buildings paint its cityscape either; only temples and crumbling mansions rise to greet the horizon. Barely touched by modernity, Vientiane maintains its old rustic atmosphere.

Lost in the hands of time, Vientiane boasts of its rich historical grounds and magnificent architecture. One example is Buddha Park, a sculpture park that concretizes the people’s faith and shows off their beliefs. With over 200 religious statues, including a massive reclining Buddha image, the park is frequented by both local tourists and foreign visitors. Built in 1958 by a monk, it also features Hindu gods and other creatures from both Hinduism and Buddhism.

Vientiane is full of beautiful temples and monuments. A few that you shouldn’t miss seeing are the famous That Luang and That Dam temples.

Another temple you should definitely visit is the Wat Si Saket. Thousands of Buddha images are housed in its walls, many dating back to the 16th and 19th centuries. Made from wood, stone, and bronze, these statues have survived the tests of time, war, and weather. The structure itself is a real treasure, with beautiful interior walls that are almost 300 years old.

Enter the gates of ancient culture and relive the untold history of the Laotians. Be swept away by the splendor of your surroundings, and feel the embrace of the wind that carries you. Be enthralled, be captivated. Drown in the grandeur that looms before your very eyes.

This is Luang Prabang, and the magic is just the beginning.

Considered a World Heritage Site by UNESCO, this little town of majestic terrains is a perfect stop for a taste of real Asian travel. Once the royal capital of a Laotian kingdom, Luang Prabang continues to emanate the kind of radiance only felt in the presence of a monarch. Its old and crumbling colonial architecture, glimmering Buddhist temples, and untamed natural wonders will leave you in awe of everything that is around you.

Swim to your heart’s content in the creamy waters of the great Mekong River, and sail your way up to the bend after. If you prefer climbing, then explore the forested peaks that envelope the area.  Take the chance to look at the beautiful Luang Prabang from a whole new different angle.

One important thing you absolutely shouldn’t miss when you go to Luang Prabang is the Royal Palace or Haw Kham. Now a museum, it was built in 1904 during the French occupation for King Sisayang Vong and his family.

Kept within the regal halls of this building are precious possessions of the said king and his descendants. A three-headed elephant housed by the royal parasol will welcome you as you enter the palace doors.

A majestic room called the Throne Hall will dazzle you with its mosaics and mirrors, swords, and other royal regalia.

The most sacred image in Laos is also kept here: the Pha Bang, a golden Buddha image believed to have been made in heaven. It is said to have miraculous powers that keep the country safe and secure.

Located in Southern Laos, the Bolaven Plateau is known for its picturesque setting, cool climate, and several ethnic villages. With fertile soil, it remains to be in a beautiful shade of green almost the whole year round.

The Bolaven Plateau is home to some of Asia’s best waterfalls. The Taat Fang and Tad Fane, for example, give a dramatic yet comforting feel. The view of cascading waters will ultimately make your heart skip a bit.

Coffee and tea plantations can also be found in the area. Blending with the fresh highland air, the coffee aroma will stimulate your senses as you roam around the greeneries. For a more meaningful travel, take your plantation visit as an opportunity to learn about the Bolaven Plateau from the locals, especially from the farmers who toil in the lush farmlands.

The capital of the Champasak Province, Pakse was founded by the French in 1905. Although much of its colonial heritage was destroyed during the Second Indochinese War, it has retained its laidback atmosphere, which tourists long for.

Pakse, like most of the country, has Buddhist temples and monasteries. There are at least 20 wats in the area, and two of the biggest are named Wat Luang and Wat Thai Fam.

Wat Luang has a small school and a thaat (a commemorative structure) that holds the ashes of a former prime minister. Wat Thai Fam, on the other hand, is located near the Chamapasak Palace Hotel and is a favorite location for temple festivities. It also shelters a small Buddha image.

Pakse also boasts of its own World Heritage Site—the Wat Phu or “Mountain Temple.” Standing on a hillside, it offers a breathtaking view of the Mekong River and the area that surrounds it. Wat Phu is one of the oldest archaeological sites in the country; its walls and pillars, in fact, were built as early as the 5th century.

If you want to know more about the history of the province, you can go to Champasak Heritage Museum. Here you will find artifacts, pictures, and written documents that record the events leading to the formation of the region.

Of all Laos’ attractions, the Plain of Jars in Phonsavan is the most unique and mysterious. Stone jars carved from sandstone and granite lie across the vast Phonsavan grounds, with sizes varying from tinny-tiny ones to about 3.5 meters high.

No one knows exactly why these jars were made, although legends about them have been circulated. Some people believe they were used to keep rice wine, while others say they were for storing corpses.

Until now, the real purpose of these jars has not been confirmed.

Located southeast of Phonsavan, the town of Muang Khoun was once the royal capital of the Phuan Kingdom. With its architecture and landmarks, it blends Laotian culture with colonial legacies. French buildings still rise at the town’s center, as well as temples like Watt Si Phum, which houses a sitting Buddha. Vistas also surround this sleepy town. You can go hiking to see the entirety of the area, but expect that the spectacular view of the town, which is dotted with jars made of granite, will make you want to stay for a little longer.

The architecture in the City of Savannakhet is perhaps one of the reasons tourists flood the area. Other than the usual Buddhist stupas, you will find Vietnamese temples and Catholic churches around the city. The peaceful subsistence of different religions in a small piece of land makes Savannakhet a place worth visiting.

Aside from having different religious buildings, Savannakhet is also home to a thousand-year old stone house called Heuan Hinh. Once used as a shrine by the ancient Khmer, it was intended to add magnificence and give glory to their growing kingdom. Unfortunately, most of its original carvings are lost, and the structure itself is in danger of collapsing.

Unlike Heuan Hinh, That Ing Hang Stupa has its fine carving and decoration intact. Said to house the remains of Buddha’s spine, it is considered a sacred stupa and an important place of prayer of both Lao and Thai Buddhists. Before entering the temple, females might be required to wear a traditional sarong to pay respect to the local culture.

Vang Vieng is simply nature’s best. With mountains and rivers, caves and limestone cliffs, it is hard not to fall in love with its incredible beauty.

Small yet scenic, Van Vieng offers a lot of activities for the adventure-seeking soul. If you want to explore caves and caverns, Tham Poukham and Tham Norn are the perfect spots to visit. The former features what is now called the “Blue Lagoon,” a lovely spot to float around, swim, and swing on a rope. The latter, on the other hand, is among the largest caves in the area.

There is also Nam Song River, where you can enjoy the waters while basking in the sun. Besides swimming, you can also go kayaking, sailing, and tubing. Such water activities have gained much popularity so much so that tourists come to Vang Vieng just to try them. Rafting is also a must-try activity, as well as trekking through the hills and mountains.

If all you want to do is sit down and relax, you can just stay on the riverbank and watch the beautiful Laotian sunset. And if you are in luck, you might witness thousands of bats coming out of their karst homes in the evening to find food. 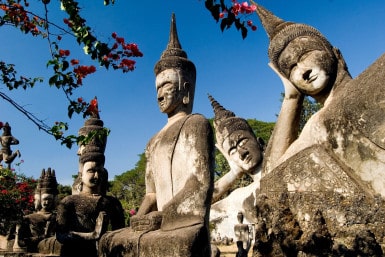 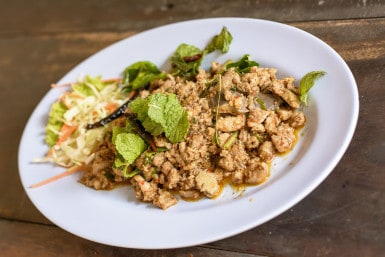 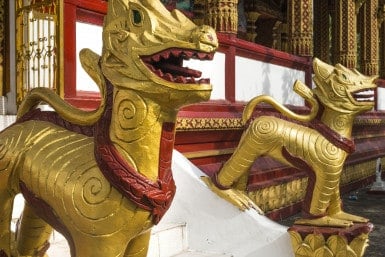 What to do in Laos