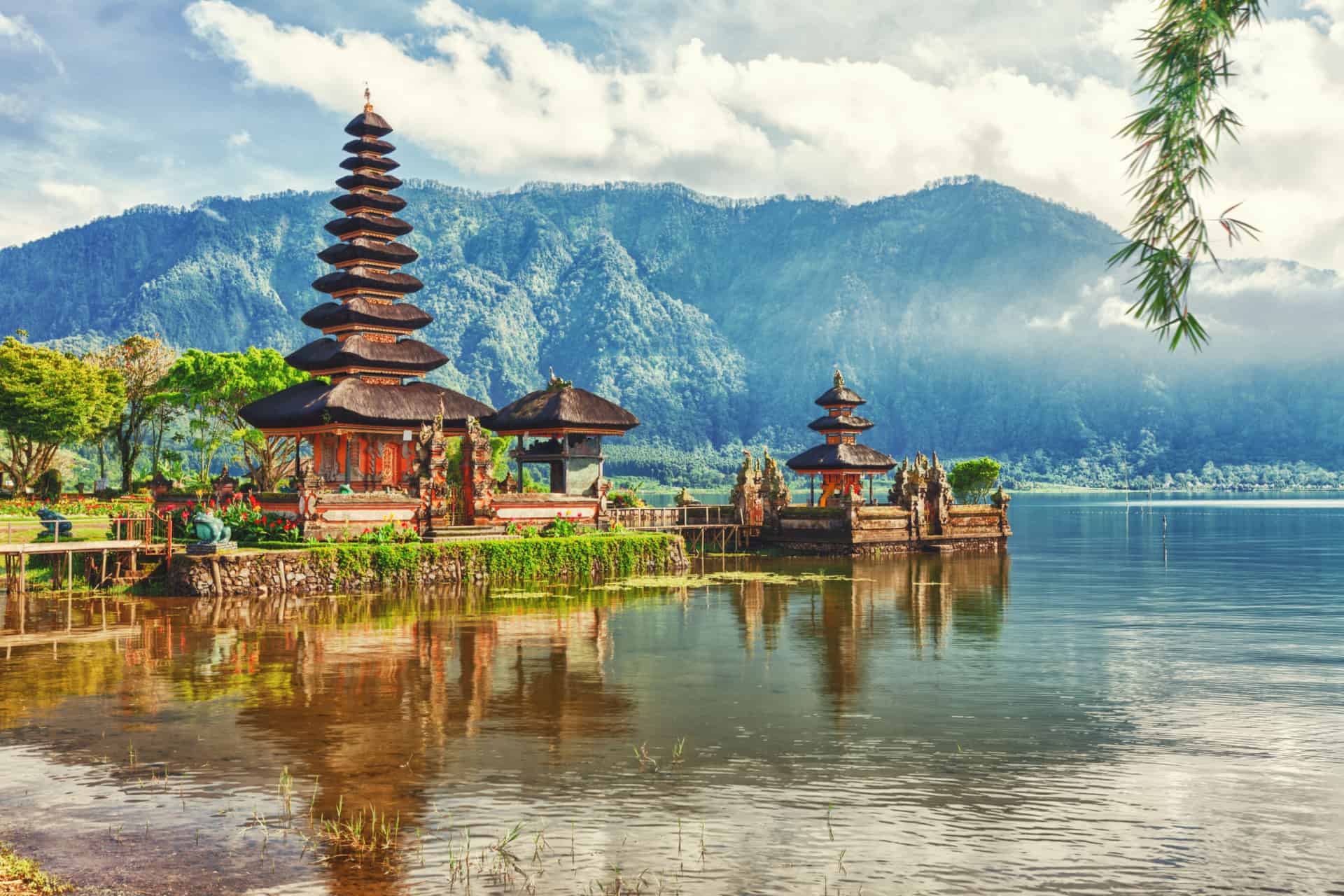 Borobodur lies at the heart of Java, the island where Jakarta sprawls and plays a central role in the life of all Indonesians. At first glance, visitors would mistake Borobodur for a temple. With hundreds of Buddha statues and thousands of relief panels telling the life of Buddhist saints, the structure best serves as a shrine for a faith long banished from the island.

Nobody knows for sure who built this massive stone edifice. It might be a beloved Javanese king whose dynasty was deposed after the arrival of Islam. For whatever good intentions, this artificial hill, with stupas and a single large dome dotting the skyline, was left alone by the flood of invaders.

A thousand years after it was built, Borobodur, together with the nearby temples of Pawon and Mendut, still hosts tourists and Buddhist pilgrims alike. These are the best examples of ancient Indonesian architecture.

Jakarta is the heart and soul of Indonesia. This thriving metropolis is the cultural, economic, and political center of the country. It is also the gateway to the far-flung islands and valleys, where pristine beaches and stunning landscapes await to be explored. A tour of the capital has its own rewards, too. After all, Jakarta is Indonesia under a microscope.

A tour of the Big Durian begins at the Merdeka Square. It is where the National Monument stands proudly along with dozens of statues and reliefs, celebrating the country’s heritage. The massive pillar symbolizes two of Indonesia’s traditional tools – rice and pestle. There is also a museum inside the monument, which tells the story of Indonesians in paint canvass. A walk further in leads visitors to the Hall of Independence. It is where the original text of the Independence Proclamation is stored.

The Muezzins’ call to prayer from the minaret of the Istiqlal Mosque can be heard across Central Jakarta. Built in 1978 to commemorate Indonesia’s independence, the Istiqlal Mosque serves as a national mosque. It stands next to Jakarta Cathedral and is the largest mosque in Southeast Asia.

A tour of Jakarta is incomplete without paying homage to the old town of Kota Tua. A walking trip is recommended for many of the old buildings stand next to each other. The Wayang Museum dedicates itself to the fine art of shadow puppetry, while the Jakarta History Museum was once the city hall during the Dutch period. Cross the Jembatan Kota Intan drawbridge, or get lost at the Glodok and Pinangsia Chinatown. The old town of Kota Tua, albeit crumbling, offers a lot more interesting destinations that an entire day of walking would not be enough.

If not for the dragons that inhabit these islands, Komodo and Rinca would remain places of insignificance. Fortunately, the Komodo dragons, the largest lizards, make these islands their home

In these islands, you can witness how the reptiles gobble a goat with one bite or even attack a buffalo. Though hiking trails are present, walking alone is not permitted. The dragons are known to attack humans and have already killed two in the last twenty years.

Lombok has become the second top tourist destination after Bali. The island itself is a tropical paradise, only less crowded and less pricey than its more prominent twin across the channel. With white sand beaches stretching across Kuta, this surfer’s paradise is deserted at times. In fact, it is still possible to have the entire beachfront, with its legendary waves, all to yourself.

Gill Islands, just off the coast of Lombok, is a snorkler’s haven. This trio of lush islands has largely escaped the speedy construction of roads and accommodations happening at the main island. Automobiles are banned, and so are large resorts, but there are chic villas and even rustic huts with hammocks that you can rent to pass the time and forget the world you left behind.

Nothing beats the allure of the frontier, especially in Indonesia where some of the islands remain largely untouched by civilization. Consider Baliem Valley in Papua, an “island” in a sea of trees, purple fields covered with sweet potatoes, and largely unexplored mountains dotted with tribal villages, whose beginnings have been lost to stories.

Days are long and uneventful in this sleepy valley, unless you’re a Christian missionary in a quest to convert the Dani, Lani and Yali tribes, or you have come around August when Wamena, the commercial center and the nearby tribal villages thump with traditional song and dance, staged mock battles, and pig feasts to celebrate the festivities.

A word of caution: Baliem Valley and Wamena are located at the interior of the province. Expect everything to be flown from the nearest port of Jayapura. Therefore, consumer goods tend to be a little pricey.

Many in the West would like to think Bali is a place apart from Indonesia. After all, no island can boast a culture so different and yet so profound. Bali actually outshines everything Indonesia has to offer.

Bali’s charms not only come from its white sand beaches or glitzy nightclubs. Steeped in customs and traditions that go all the way back before everyone else looked at Mecca, the Balinese have developed their distinct way of life with some heavy borrowing from India.

Indulge yourself in a gustatory feast, while overloading your senses with traditional dances and songs in Ubud. Surrounded by fragrant rice fields and ancient temples, the town itself is seen as the heartland of Balinese culture.

The seaside town of Kuta offers the most vibrant nightlife in the island. Located south of the capital Denpasar, Kuta has rows of hotels, restaurants, clubs and spas that line the main streets. Just further south are the white sand beaches that stretch for miles across. Despite being overcrowded at times, the azure coastline remains a top destination for surfers.

Denpasar is often seen as the gateway to Bali, but behind the hustle and bustle of the capital, the city abounds with shops selling artworks and pottery that are distinctly Bali. Sarong and batik cloth are also sold here.

The poverty and backwardness of a place don’t hinder tourists from coming. As long as it has something to offer – like tribesfolk who still bury their dead under massive stone structures or megaliths, or bloody horse fights (pasola) done in ritualistic fashion – there will always be sights for the curious to see.

In Sumba Island, what is forgotten elsewhere is remembered here. This off-the-beaten-track brings you to a land blessed with near-infinite sunshine, where handsome horses and exotic birds roam free and large and where extended families live in thatched houses. Accommodations are Spartan at best, and roads, which are mostly unpaved, connect the sparse villages to the main towns.

However, no matter how primitive Sumba appears, signs of modernity are creeping across the island. CNN is widely available in cable channel, and while there are six languages used to communicate with the tribes, Bahasa is widely spoken.

Tana Toraja is home to a people whose obsession with the afterlife mirrors their very elaborate funeral rituals. A deceased person is lowered into a drum-like coffin, to be preserved in formalin. The casket is then left in the matriarch’s bedroom to “sleep” for months until it is ready to be moved in caves and cliffs guarded by man-sized wooden effigies. Buffalos are slaughtered during the last days of the funeral season, which runs from July to August.

This macabre display surely is not the only reason tourists flock the region. Apart from whitewater rafting and slender tongkonan houses, whose curved roofs resemble those of sailboats, Tana Toraja’s allure comes from its uniqueness. So come and see what Toraja has to offer. Toraja metaphysics can explain the meaning of life, which apparently hungers for understanding.

Soul searching in Indonesia would be incomplete without stepping foot at the heart and mind of Java – Yogyakarta. The city once served as the capital during the Indonesian National Revolution of 1945.

Renowned as the hub of Javanese arts and culture, dozens of museums remind the city of its heritage. The pyramid-shaped Yogya Kembali displays dioramas of the turning points of the revolution. Fort Vredeburg, meanwhile, is one of the last surviving examples of Dutch architecture. Converted into a museum, the fort now stores artifacts from the colonial times.

The city itself, which spreads outward from the Kraton or Sultan’s Palace, is still governed by a sultan. Inside the palace complex are dozens of landmarks. There is the Taman Sari, also called the Water Castle. Its partly ruined grounds once served as the sultan’s pleasure garden. You can also find Siti Hinggil Selatan, which runs a shadow puppet performance every weekend. Finally, there is the Masjid Gede Kauman. The mosque is one of the oldest and largest in Yogyakarta. Catch the sultan as he performs his religious rites and ceremonies inside the mosque.

Other places of interests in and around Yogyakarta are the Gadjah Mada University, the enigmatic and awe-inspiring Prambanan temple complex, and the Maliaboro shopping area.

Deep beneath the shores of Pulau Bunaken are living treasures for all to see. The vivid colors, the ephemeral sights, and the explosion of aquatic creatures make this island an important destination for snorklers and scuba divers around the world.

The legendary marine biodiversity, which includes around 100 types of corals and more than 3,000 species of fish, is protected under government laws. Conservation groups, business owners, and local leaders even work among themselves to sustain the fragile ecosystem.

Travel to Bunaken Island takes an hour of boat travel from Manado City. Since Manado is very accessible even from cities abroad, booking a flight there wouldn’t cause any inconvenience. 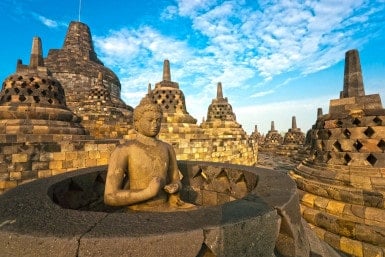 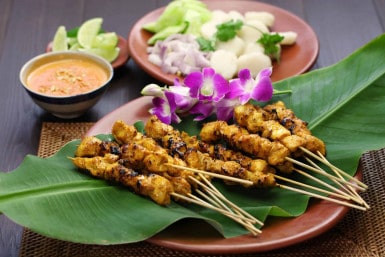 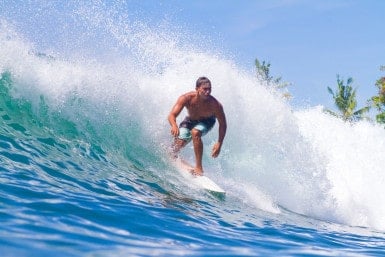