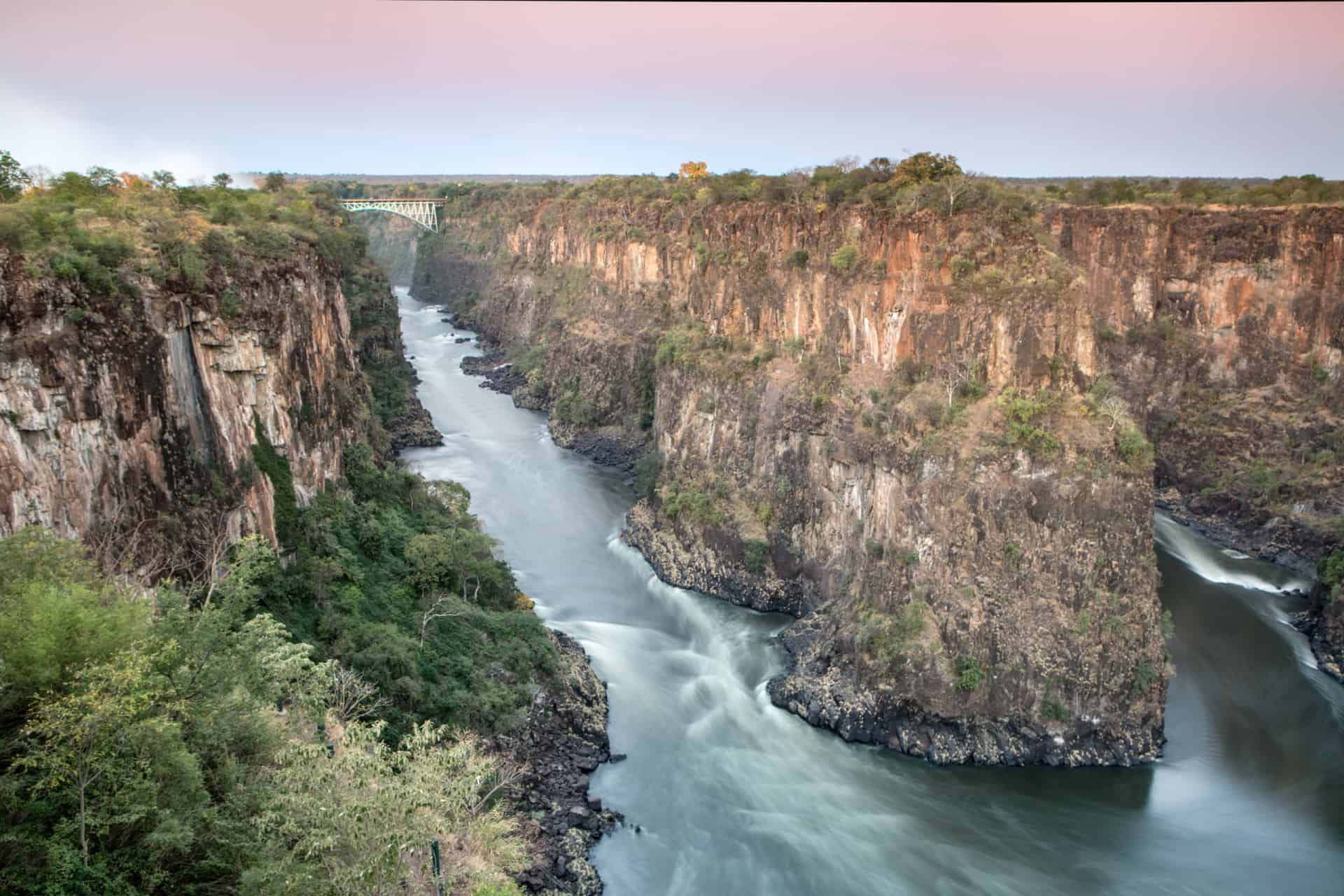 Victoria Falls, found in the Zambezi River, is one of the seven natural wonders of the modern world.

The Kololo tribe, who once lived near it, called it the Smoke that Thunders (“Mosi-oa-Tunya”) presumably because of the combination of mist and deafening sound that it tons of falling water creates.

The waterfall can be seen from miles away. Roughly 546 million cubic meters of water crash through each minute, over a width of two kilometers and a height of 100 meters.

Nearby, the Victoria Falls Bridge is a railway that sends trains just below the Victoria Falls. Commissioned in 1900, the railway bridge has one of the best views of the waterfall, with a view down the gorge on one side of the train and a view through the roaring falls on the other side.

Another great vantage point for the Victoria Falls, but this time on foot, is the Knife Edge Bridge. Walking through the bridge is just like walking on the water itself, but be ready for the spray of water from the waterfall – don’t bring any electronic gadgets that you don’t want to get wet!

The Zambezi River is the fourth largest river system in Africa. The only ones larger than it are the Niger river, the Zaire river, and – of course – the Nile. The river crosses six countries as it finds its way from central Africa to the Indian Ocean.

The appeal of the Zambezi River is its untouched nature – there are virtually no human settlements on its banks, and therefore, there is no pollution that taints the river.

The river stretches through a distance of 2,700 kilometers, starting as a little spring in the northwestern region of Zambia. As it goes on, it slowly builds up size and power, eventually serving as the boundary between Zambia and Zimbabwe.

As the Zambezi goes through the Victoria Falls, it provides a venue that is perfect for water sports such as rafting, river boarding, and kayaking.

But if you’re not into water sports, casually relaxing as your boat travels through the river is a perfectly fine and calming alternative.

The Lake Kariba is a calm and scenic lake that offers tourists amazing views, spectacular fishing spots, and a venue for just relaxing and soaking up the sun.

Lake Kariba is actually a man-made dam, and it is the largest one in Africa. It is 226 kilometers long, and at certain points of the lake, it is 40 kilometers wide.

The lake is so immense in size that at times, the person traveling through it feels like he or she is in the ocean!

Lake Kariba was created to generate electric power for areas in Zambia and Zimbabwe. The lake is also home to a commercial fishing industry that is slowly creating success for itself.

Going on a houseboat cruise in Lake Kariba is a favorite for both honeymoon couples and families. The best time to go on such a cruise is during sunset until night, especially when the moon is full.

Cruises also get you up close to the lake’s favorite residents – hippos!

The Chimfunshi Wildlife Orphanage lies on the headwaters of the Kafue River. Under the care of David and Sheila Siddle, the orphanage has grown to include other animals.

The couple retired in the early 1970s, returning to farm in Chimfunshi. Sheila, who was known for caring for animals, received a young chimpanzee in 1983 that was rescued from poachers. The chimpanzee wasn’t expected to live, but Sheila took care of it and nursed it back to good health.

This was the origin of the Chimfunshi Wildlife Orphanage. Today, Chimfunshi is recognized internationally as a sanctuary and rehabilitation center for animals. Running mostly on the dedication of the Siddles, along with financial support from donors, Chimfunshi has now begun an ambitious plan to transform a recently bought 10,000-acre piece of land into a fenced enclosure for the chimpanzees, along with a wildlife preserve, educational facilities, lodges for tourists.

Compared to other reserves that rely on commercialism, Chimfunshi thrives just on love from the Siddles ¬– and donations from concerned individuals and groups.

There is a legend that tells the tale of a tribe from Congo that traveled into Zambia. During their journey, they came upon a dead crocodile near a lake, which they believed was a good omen, so they called themselves Bena Ng’andu, which translates to “the people of the Royal Crocodile.”

The lake was then named Ishiba Ng’andu, which translates to “The Lake of the Royal Crocodile.”

Ishiba Ng’andu is a placid lake that is a good visit for tourists who wish to be captivated with scenic views.

Tourists can also visit Kapishya, which is just nearby.

The Kapishya Hot Springs is a natural hot spring that is bound by lush vegetation and trees. Hot bubbles flow out from the white sand of a pool which is crystal clear.

The Kapishya flows out into the Manshya River. Small chalets, which also serve meals to guests, have been erected in the area.

The name of Lake Bangweulu can be translated to “The Place Where the Water Meets the Sky.”

It has been called thus because the gray-blue water of the lake sometimes completely blends in with the color of the sky, making it near impossible to discern where the horizon is.

Today, the lake serves more as a fishing spot than as a prime tourist destination, but the construction of a tourist resort is currently being planned.

Even before the resort is completed, however, tourists can already drop by to see just how beautiful the lake is, especially in the morning when the sky is clear and the horizon simply becomes invisible.

There are several towns around the lake, the largest of which is Samfya. It was erected in the 1900s primarily as a fishing village, and you can get your supply of fresh fish from here.

Additionally, in October, Samfya is the site of the Kwanga ceremony of the Njumbo tribe, which provides a glimpse into local traditions and dance.

The South Luangwa National Park is a 9,050 square kilometer park that has been dubbed by experts as one of the world’s greatest wildlife sanctuaries, due its immense concentration of wildlife.

The lifeblood of the park is the Luangwa River, which helps host a wide variety of animals in the park. The walking safari originated here, and it is still one of the best ways to appreciate and experience the natural beauty of the park.

There are over 60 animal species and 400 bird species in the park. As you cross the bridge that goes into the park, you will already see the hippos waddling in the river.
Zebras run across the fields in groups of roughly a dozen. There are also 14 species of antelopes in the park, most of which can easily be seen in the open.

Visiting the park feels like visiting the animals’ natural homes – an experience that is a hundred times more thrilling than visiting a zoo.

The 4,902-square-kilometer Lower Zambezi National Park is one of the newly created parks in Zambia.

While it is still underdeveloped compared to the older, more established parks, it still offers a very personal experience with the animals. In this park, you can get as close to the animals as possible.

The Lower Zambezi National Park is thick with forestry and woodlands. An escarpment in the northern part of the park serves as a physical barrier to keep most of the animals within the park’s boundaries.

The Zambezi River runs through the park. Hundreds of elephants stay on the river’s edge.

Buffalo are also commonly found near the river.

However, most of the animals are on the valley floor. There are sizeable populations of lions and leopards roaming around the park, along with the ever-popular fish eagle.

If you plan to visit the Lower Zambezi National Park, be prepared for an experience that would literally put you face to face with these animals.

The Livingstone Museum is named after the explorer responsible for putting Zambia on the map – the late David Livingstone.

The Livingstone Museum has four galleries: The first gallery is called Prehistory; it is an archaeology gallery of excavated relics in Zambia. The second gallery is Ethnography and Art, which shows the changing culture of the country through the times. The third gallery is History, showcasing the rise of Zambia from a speck in Africa to the tourism draw that it is today. The fourth gallery is Natural History, which exhibits the natural diversity of Zambia.

The museum also exhibits a collection of David Livingstone’s personal items and his descriptions of the routes that he took during his exploration of Africa.

The Livingstone Memorial serves as tribute to the man who traveled through Africa in search of the source of the Nile and discovered, instead, the now-famous Victoria Falls.

David Livingstone, who had shared the Victoria Falls with the rest of the Western world, died in 1873 in Ilala, Zambia due to a combination of severe exhaustion, malaria, and dysentery.

An inscription was carved on the tree under which he took his last breath, and his heart was buried underneath it. His body was then shipped back to England.

Today, a small monument known as the Livingstone Memorial marks the spot where the tree once stood. The monument was erected exactly on his 100th death anniversary.

A cast of the original inscription can be seen at the Livingstone Museum, and the original carving is preserved at the Museum of the Royal Geographical Society in London.

Tourists who visit the memorial will see the immense admiration of Zambia for this trailblazing visionary and explorer. 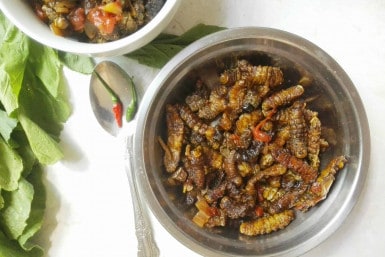