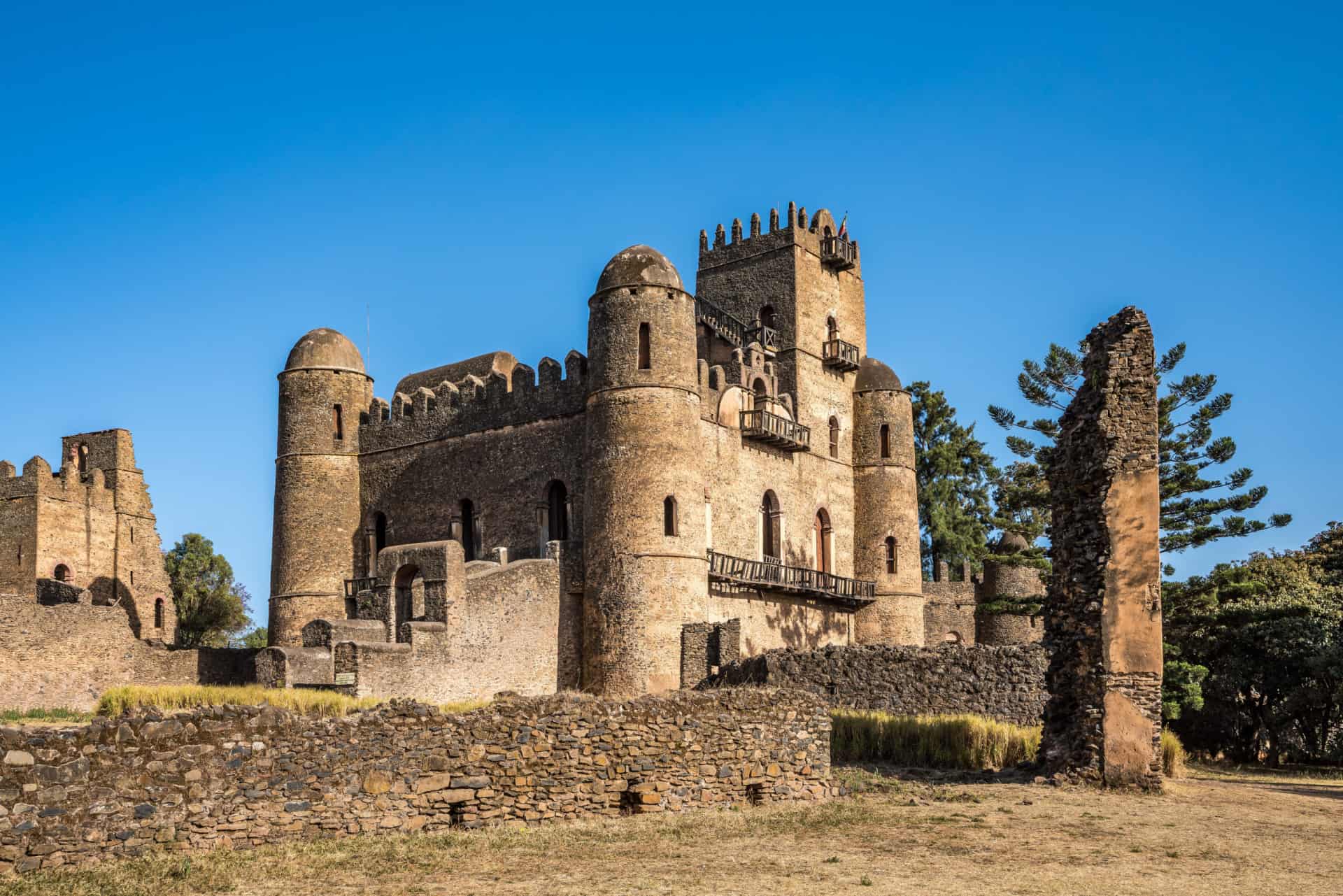 Only five minutes away from Bahar Dar town lays Blue Nile River’s grandest and most remarkable spectacle – the picturesque Blue Nile Falls. Locally called Tis Isal, or “Smoke of Fire,” the Blue Nile Falls features a 37-to-45-meter cascade that effortlessly awes observers with its powerful surges of crystal clear mountain waters.
Spanning 800 kilometers before reaching the prairies of neighbor Sudan, and with an impressive width of 400 meters during the rainy season, the Blue Nile Falls immortalize the long history of greatness of the legendary river as an integral segment of the African natural heritage.
Near the mighty waterfalls are equally succulent ravines and forests that provide shelter for a significant number of underbrush monkeys and birds. From these gorges, one can often see the rainbows created by the mist from the Blue Nile River’s powerful spray.
With its striking appeal and natural heritage, the Blue Nile Falls is truly a must-see for nature lovers and adventure-seeking travelers.

Once considered as the eighth wonder of the world, the monolithic Church of St. George in Lalibela in the region of Amhara is one jewels of the country’s cultural history. Constructed in the early 13th century, it was the last to be completed yet the most popular among the eleven churches in the sacred area of Lalibela.
Ethiopian history relates that the church was built by King Gebre Mesquel Lalibela in accordance to what he believed was a presentiment from St. George. The 25x25x30 meter structure was carved out of rock and features a deeply trench where a baptismal pool is found.
The Church of St. George has been a remarkable religious symbol in Ethiopia since its completion. This place of worship is also listed by the UNESCO as a World Heritage Site.

The Great Rift Valley is a geological fault system on the plate covered by East Africa and parts of Southwest Asia. It has a length of more than 4,000 miles and stretches far beyond the territorial boundaries of Ethiopia.
The rift, with an elevation ranging from 1,300 to 6,000 feet above sea level, is believed to be a product of thermal currents occurring along the earths’ mantle.
In Africa, the Great Rift Valley lands on Ethiopia, Kenya, Tanzania and Malawi, hailing from the Red Sea. A number of Ethiopian lakes, small and long alike such as Lake Turkana and Lake Nyasa, are directly over the fault system.
Today, the area is filled with wildlife such as waterbucks, buffaloes, flamingos, and zebras.
One thing very special about this valley is that, when you gaze at it, you are in fact gazing at the only geological feature on Earth that can also be seen by astronauts on the moon.

An accidental work of art, one might think, after witnessing the wonderful Semien Mountain along the mountainous ridges of the African continent.
The Semien Mountain was formed after years of incessant damage and wearing down of the Ethiopian tableland. The boondocks were then beautifully formed with steep slopes and dipping valleys and even rose supreme alongside Ras Dejen, the highest Ethiopian mountain and fourth highest in all of Africa.
Through the years, Semien Mountain has been functioning as a national park providing habitation and protection for some of rare animals such as the walia ibex, an endangered goat species which can now be found only in the country. Apart from this wild goat, the park is also home to the Gelada baboon and the aloof Ethiopian wolf.
More than 50 unique species of birds are also sheltered in the national park.
Apart from the animals, the flora of the park is equally striking. Semien Mountain is divided into three botanical zones: the lower slopes where various herbages are grown, the forest alpines, and the high slopes where pasturage grasses are grown.

The Nechisar National Park is one of Ethiopia’s outstanding attractions for having contrasting yet complementary natural features.
Nechisar, meaning “white grass,” earned its name for having white grass protected prairies. These plains are found in the east portion of the North Omo Zone and Arba Minch.
Apart from grass prairies, the park also features tall forestries, undergrowth covered lands, and the Amaro Mountains where low rolling hills lay near the base.
On the other end, the Nechisar National Park also hosts bodies of water such as the famous Lake Abaya and Lake Chamo which, in fact, occupy a significant portion of the park. These lakes are a major attraction in the park, capturing on-lookers with their distinct features.
Lake Abaya, located at the northern area, is of reddish-brown tone whereas Lake Chamo is awe-inspiring with its crystal white shorelines on the southern part of the park.

The Royal Enclosure in Gonda is a sure scene-stealer with its 70,000 square meter majestic complex where old castles and stone walls are erected. The site does not charge admission fees and even offers free guided tours around the compound for about an hour and a half.
The enclosure specially features the Fasilada’s Palace, a 32-meter tall palace located at the rear part of the complex.
The palace is made of axe-cut stones and manifests architectural influences from different styles including Indian, Moorish, Portuguese and Aksumite.
Fasilada’s Palace stuns with its elaborate walls fortified with ancient battlements. It stands gigantic with four towers having hemispherical roofs.
The palace features Emperor Fasilada’s ancient prayer room where the most significant churches and religious sites in Gonder are visible from strategically positioned windows. It also has a watchtower overseeing the panoramic Lake Tana.
The rest of the structure reflects Fasilada’s reign as emperor with impressive receiving areas, dining halls and platforms for public addresses and speeches.

The St. Mary Church is an important part of the historical Entoto mountains overseeing the capital Addis Ababa. Entoto served as the encampment of Emperor Menelik II in the late 19th century where he built the St. Mary Church for his wife, Empress Taitu in 1882.
The ancient churched witnessed the emperor and empress’ coronation as rulers of Ethiopia seven years after its completion.
Presently, the church serves as a surviving reminder of the emperor’s reign. In the interior wall of the church, a portrait of Emperor Menelik II is displayed to commemorate his establishment of the religious site.
Another church within the famous Entoto complex that was also dear to the emperor is the octagonal church of Archangel Raguel. It is believed that the emperor found leisure in walking along the church’s banister.
Apart from these churches, the Entoto complex also features a museum that displays memorabilia of Emperor Menelik’s reign such as ancient clothing, weapons, accessories, furniture, instruments and photographs.

The old village of the Hamer people of Omo River Valley depicts an enduring picture of distinct Ethiopian living.
The Hamer tribe is a small community of only 43,000 individuals. In their small village in the Hamer Bena Woreda District, indigenous Ethiopian culture remains compact and is still widely practiced.
A visit to the village of the Hamer tribe would elicit a better understanding of the aboriginal culture of the country. Here you will witness the Hamer people’s traditional activities as well as simple ways of life.
Hamer tribesmen spend most of their day in the village pasturing and tending farm animals while the women take care of the children and manage the small household.
The Hamer people, despite being officially Muslim, still perform animistic rituals. During the day, the Hamers worship and give offerings to animals, plants and inanimate objects within their village.
A sought-after spectacle in the Hamer village is the tribesmen’s performance of the bull-jumping ceremony. In this ritual, young Hamer men leap over a streak of bulls to become a recognized member of the male elders known as the Maza.
The ceremony is often followed with days of festivities where the Hamer people perform traditional jump dances and celebrate with African sorghum beer.

Debre Libanos is an old monastery built by Saint Tekle Haymanot, the highest honored saint of Ethiopia, along the Abbay River in the 13th century.
Unfortunately, the monastery was gravely damaged during the invasion of Ahmad Gragn on July 21, 1953. Although the original structures have not survived through the years, the remains of the monastery is still a leading religious destination for its momentous attractions.
The complex features Saint Tekle Haymanot’s tomb which was built by Emperor Haile Selassie in 1961. The site also features a portion of the True Cross and an older version of the Church of the Cross.
Saint Tekle Haymanot is believed to have meditated and lived for years in a cave found among the cliffs not distant from the monastery. A spring flows from the cave, which is said to be holy and is sought after by most tourists on pilgrimage.

Lake Tana, the largest lake in Ethiopia, is dubbed as the most mystifying lake in the world. Its sparkling clear waters supply the stream of the famous Blue Nile, flowing until the Mediterranean.
Aside from its arresting scenery, Lake Tana is highly regarded as a complete cultural destination, featuring religious sites and culturally significant art pieces and many other national treasures.
Lake Tana’s islands host magnificent churches and monasteries which feature splendid paintings dating as far back as the medieval era.
The lake is also embellished by 37 small islands which are perfect destinations for watching endemic and migratory birds soaring across the beautiful skies of the town of Bahir Dar. 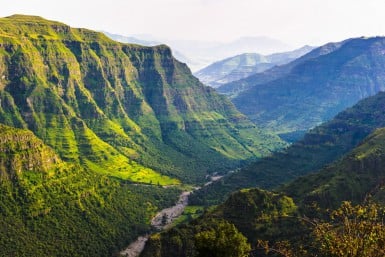 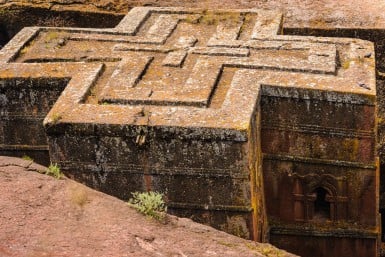